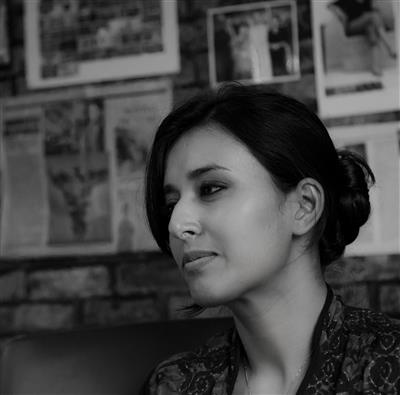 Charuvi Agrawal is a visual designer with a background of painting (Bachelor of Fine Arts) from Delhi College of Art and animation (Sheridan Institute of Technology and Advanced Learning, Canada). Trained as a painter, she went on to experiment with a variety of media. Her work encompasses sculpture, interactive installations, painting and animation film. The works are visually opulent; technically ambitious that reworks the imagery and mythology of the popular Indian narratives. A technique she often employ in her artworks is the juxtaposition of small and everyday against the large and imposing. She lives and work in New Delhi.

Charuvi Agrawal born on 20 June 1983, is painter, sculptor, animator, filmmaker and visual artist. She graduated from Sheridan Institute of Technology and Advanced Learning, Canada. She is a gold medalist in fine arts from the College of Art, University of Delhi.

She founded CDL (Charuvi Design Labs) in 2009, and worked in Canada for National Film Board.

Her biggest achievement is her own 3D Animation film Shri Hanuman Chalisa made in 2013 which got many awards. She is a well known personality in the field of animation and fine arts.

Agrawal was born in 1983 in New Delhi. She trained in fine art at the College of Art in Delhi where she won a gold medal, and followed it up with a graduation in computer animation from Sheridan Institute of Technology and Advanced Learning in Canada. A multi talented artist she paints, sculpts, designs, works in animation and films.

Her most notable work is her animated short film Shri Hanuman Chalisa and Bell Sculpture of Shri Hanuman of 26000 Bells.

The petite young woman with dazzling long locks has chosen to deliberate on something that was a childhood hobby- creating interesting figures out of clay.

She learnt clay making at a summer camp that happened at her school, when she was in class VI. She not at all thought she would excel to this extent later in her life.

For example, The miniature of former PM Dr. Manmohan Singh, depicts him as puppet and the one of APJ Abdul Kalam depicts him on rocket with a comb in his pocket! Basically, she combines the art of cartooning with that of sculpture.

Charuvi Design Labs (CDL) is a leading animation studio and design lab founded by Charuvi Agrawal in 2009. CDL is an independently owned and operated studio of national and international repute, specialize in 2D and 3D Animation, VFX, Design and Interactive Art Installations.

CDL studio has partnered with numerous global brands and international agencies and has showcased its talent at countless exhibitions and festivals in India, as well as around the globe.

The soundtrack is sung by Amitabh Bachchan, along with 19 other well known singers such as Sonu Nigam, Udit Narayan, Hariharan, Shankar Mahadevan, Shaan and more.

The film has been bestowed critical praise across the globe and nominated in 6 Oscar qualifying films.

The film tries to push the limits of our understanding of faith and spirituality.

Shri Hanuman Chalisa is a film filled with impressive and visually eye-catching scenes of Hindu mythology God - Shri Hanuman. Our perceptive of the divine has a variety of expressions but its factual nature lies within the realization of one‐self. ShriHanuman provides the highest expression of devotional values and is the purest embodiment seeking God.