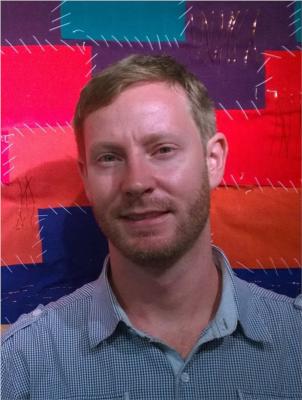 Rodrigo Franzão was born in São Paulo in 1982 and currently resides in the town of Abadiânia in the state of Goiás, Brazil since 2013. The evolution of his artistic process began to unfold after nearly a decade as a Portuguese teacher, Literature and Fine Arts. His interest in the arts began at the College of Language Arts, which through literature encouraged reflective perception. His approach was strengthened through focusing on Psychopedagogy and Art Therapy followed by Communication in Art Education, through which he discovered the crucial relevance of making art for the artist. His evolution as an artist distinctly manifested itself during his tenure at the College of Architecture and Urbanism which emphasized spatial organization and visual communication. In order to put his theoretical knowledge into practice, in 2013 he began studying further in the arts to gain a greater understanding of the historical, social and aesthetic context of art. Influenced by geometric abstraction, figurative and constructivist art, the artist expresses himself with the aim of revealing the transparency that exists through the use of every day materials. Through multiple languages he combines mixed media to show the minutiae and structure that fragment into dispersion, gap and sound.

Between 2002 and 2004, Rodrigo Franzão studied Language Arts at the University of São Marcos. During this time, he learned concrete poetry in Brazilian literature classes, which reinforced his interest for geometric abstraction. After graduating in Language Arts, Franzão taught Portuguese language and Brazilian literature for nearly a decade. During this time, he had the opportunity to combine art into his classes. Soon after that the evolution of his artistic process begun to unfold. Between 2008 and 2011, he enrolls in Psychopedagogy, Art Therapy and in Communication Art education classes at the Paulista College of Arts. At the same time, his evolution as an artist distinctly manifested itself during his tenure at the College of Architecture and Urbanism at the United Metropolitan College (2011) which emphasized spatial organization and visual communication. In order to put this theoretical knowledge into practice, in 2013 he goes further by enrolling in art college at the University Center Claretiano in Brasilia, Brazil, to gain a greater understanding of the historical, social and aesthetic context of art.

Rodrigo Franzão is influenced by geometric abstraction and constructivist art. He expresses himself with the aim of revealing the transparency that exists through the use of every day materials. Through multiple languages he interweaves mixed media to show the minutiae and structure that fragment into dispersion, gap and sound. After graduating in Psychpedagogy and Art Therapy, he started to find inspiration in almost everything that surrounds the human universe and to assimilate the way humans interact with their own repertoire. He combines two-dimensional and three-dimensional effects, creating a relationship of dependency between both. Besides geometric abstraction, bright colors are used in his artworks to harmonize the contrast between the shape and colors.

Rodrigo Franzão exhibited his first series of works entitled Involuntary Exclusion at Anexxo Gallery in Brazil. Utilizing fabric, needles and copper wire, Franzão's idea was to establish the dialogue that an individual plays between what it means to live and become a visible and active member of society through the act of becoming a consumer, and through that concealing his true essence. The following year, he presents this same series of works in the Supreme Court Museum in Brasília, a public museum with the architecture by Oscar Niemeyer. In the same year, Rodrigo Franzão introduces its new series of works in the National Arts Club in New York City, private club founded in 1898 by Charles DeKay, an art and literary critic of the New York Times to "stimulate, foster, and promote public interest in the arts and to educate the American people in the fine arts". The Exhibit titled "Katharsis" presents works inspired in the human body, showing at first plan the structures that sustain all the biological condition in the human being. Through a plan of observation, Franzão suggests in his work the harmony between geometry and figurative forms leading the observer to come across their own reality. About the artists and the series Katharsis, Robert Yahner, the curator of the exhibition, says "Franzão is one of the most dynamic and provocative artists among Brazil's new generation of talent. Enlightened by an early background in Literature and Communications, the work of Rodrigo Franzão reveals an incantatory discourse between the artist, his vision and his uninhibited involvement with found materials. KATHARSIS transforms this dialogue into an exploration of the human form moving from aspects of beauty to biological condition. The grounding force of Franzão's line combined with the vibrant play of geometric abstraction gives KATHARSIS a rhythmic power. The work is further enhanced by the artist's facile use of mixed media and a brilliant sense of color - an echoing pulse of his native country."