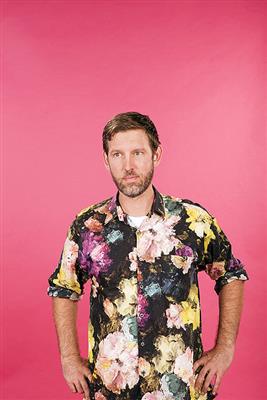 Marc Horowitz (b. 1976) is a Los Angeles-­based artist working in photography, painting, performance, and social practice. Horowitz holds a master’s degree in art from the University of Southern California, and bachelor’s degrees in art and marketing from San Francisco Art Institute, and Indiana University Kelley School of Business respectively. In a
practice that combines traditional drawing, commercial photography, and new media, Horowitz turns American culture on its head to explore the idiosyncrasies of entertainment, class, commerce, failure, success, and personal meaning. Using visual puns, large­scale participatory projects, and viral social pranks, Horowitz creates environments of high energy that lift the most mundane to the status of grand event in complex interplays between subject, viewer, and participant.

Horowitz has had solo exhibitions at Johannes Vogt in New York, China Art Objects and the DEPART Foundation (both in Los Angeles), Galerie Analix Forever in Geneva, Switzerland, The Hayward Gallery in London, and at Aran Cravey in Los Angeles. His work has been featured extensively on local and national television including ABC News, NPR Weekend Edition, CBS Inside Edition CBS, CNN American Morning, and on NBC’s The Today Show. He has taught Internet Studio Art at the University of Southern California and lectured at The Hammer Museum in Los Angeles, California Institute of the Arts, Stanford University, Otis College of Art and Design, and Yale University.

Horowitz is the son of Karen Meyer, a schoolteacher, and Burton Horowitz, a pharmacist. At age eight, Horowitz founded his first company, a ghost removal and cleaning service. He had his first press at nine when he organized a breakdancing competition as entertainment for senior citizens.

At age fifteen, Horowitz left home. For a while, he lived in an actor friend's basement and attended high school in Newburgh, Indiana at Castle High School, playing football and running track. At age seventeen, he attended Indiana University Bloomington, receiving his degree in Business Marketing and Microeconomics. He went on to attend the San Francisco Art Institute, where he studied painting. He completed a Master of Fine Arts at The University of Southern California in 2012.

In 2003, Horowitz and a longtime collaborator, Jon Brumit, reinvented themselves as the business team of Sliv & Dulet Enterprises and opened an office in downtown San Francisco (at New Langton Arts). They staffed their company with 30 people (artists) of various backgrounds to help them "develop a summer line of products and services," which they pitched to local businesses. Some examples included a fog removal initiative for the Golden Gate Bridge, a full-service office in a tent, and a Swiss Army Cubicle.

In 2005, Horowitz gained national attention while working on a catalog shoot for Crate & Barrel. He wrote "Dinner w/ Marc" along with his cell number on a dry-erase board featured in a home office shot for the catalog. When the catalog was distributed, Horowitz received more than 30,000 phone calls. He spent the following year driving across the country and having dinner with individuals that had called. This project was named "The National Dinner Tour". He was also given the distinction by People magazine to be added to their list of the "50 Most Eligible Bachelors".

In 2007, Dazed and Confused named Horowitz's website one of the 50 best sites.

Early on Horowitz exhibited his art internationally. In 2007, he had a show "More Better" at AMT Gallery in Como, Italy, "The Center for Improved Living" at Analix Forever in Geneva, Switzerland, and "Breakthrough" at Nuke Gallery in Paris, France. In 2008, Horowitz presented "The Me and You Show" at the prestigious Hayward Gallery in London, England.

In the Summer of 2008, Horowitz completed "The Signature Series." The series chronicled his journey across America as he drove along the shape of his signature. During the trip, Horowitz made 19 stops. For one of the stops, he started an "Anonymous Semi-nudist Colony" in Nampa, Idaho. He stopped in Craig, Colorado to bury people's problems in a public park plot. He even made a commercial for his high school. For his last stop on the series, Horowitz stopped at Wrightsville Beach where he froze a briefcase in the middle of a 7-foot-tall (2.1 m) patriotic ice sculpture challenged passers-by to guess when they think the ice will melt. The winner was awarded the suitcase and the surprise inside. He filmed all his stops and they are available on Youtube