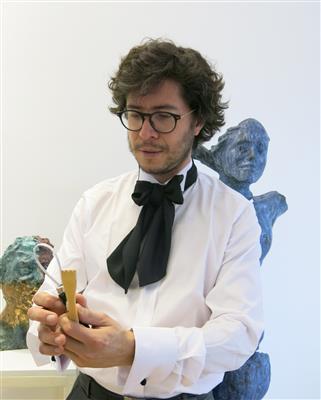 Teddy Cobeña in his atelier

Teddy Cobeña Loor (born 16 April 1973 in Portoviejo) is a figurative expressionist sculptor with a surrealist component. He lives in Barcelona.

He is the son of David Cobeña Vinces and Judith Loor Rodríguez. In his adolescence he was interested in the study of anatomy having in the family bookcase a biography of Leonardo da Vinci. He begins his studies of medicine in Guayaquil and ends his formation in Barcelona as a radiologist and in preventive medicine, there he begins at the same time a formation in sculpture at Massana School (ca), Barcelona Academy of Art (ca) and Florence Academy of Art.

His bronze work "The dreams" is in the Palazzo Panciatichi in Florence, at the museum of the government of Tuscany (Italy) since June 2013.

In November 2016 he received the international sculpture awards "Aigle de Bronze" and "Villa de Nice" in France, on the occasion of the 28th "Aigle de Nice" Fine Arts Exhibition.

His work is characteristically figurative, initially influenced by Jean-Baptista Carpeaux and later by the dalinian surrealism. In most of his sculptures the expressionist style and also surrealism is noted.

He combines the patinas in many of his bronze sculptures resulting in a range of colors.

The merger of emotional expressiveness, figuration and sometimes with surrealism (defined by himself as sensorrealism) is seen in his works.