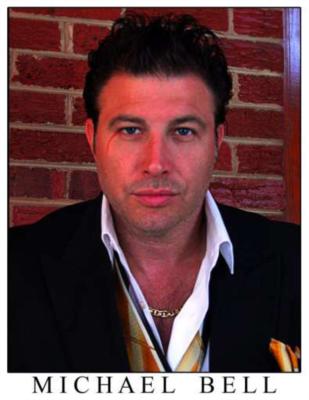 Michael Bell is a renowned American artist (b. 1971), most famous for his thematic gangster series paintings and an infamous portrait painting clientele, which includes the late John Gotti and numerous actors from The Sopranos, Goodfellas, A Bronx Tale and more.

Born April 10th, on his Mother's birthday, Bell was naturally gifted in art and experienced success at an early age, winning 1st Place in his first juried art exhibition at age 5. As an emerging artist he spent a lot of his time in and around New York City, studying art with his maternal grandmother, a self-taught artist from Lyndhurst, NJ. It was during this time period when Bell began exploring life's very personal & psychological issues visually through his paintings.

In addition to Bell’s accomplishments in the art world, he has completed his first screenplay based on real-life events surrounding his Ticket to Ride painting series. His artwork is also featured on Sopranos star Joseph R. Gannascoli's new CUGINE Cigar Line and is working on a new "Seven Scars" series for VH1's MOB WIVES Toni Marie Ricci for 2013.

As a pioneer of the Visual Journaling movement, Bell recently expanded his advocacy for arts education globally by participating in artist friend, Eric Fischl’s America: Now and Here project. Bell holds a B.F.A. from Lycoming College, an M.Ed. from Towson University, and recently won the 2013 William U. Harris Award of Excellence.

Michael Bell (born April 10, 1971), is an American portrait painter, muralist, screenwriter and author . He has painted portraits of John Gotti and actors from Mafia dramas The Sopranos, Goodfellas and A Bronx Tale. Bell is an anti-domestic violence, anti-bullying and Autism activist. In June, 2017 Bell published his memoir "DUAL LIVES: from the Streets to the Studio".

At the age of five Bell won the first juried art exhibition he entered. As a young artist he spent a lot of his time in and around New York City studying art with his maternal grandmother, Violet Vallery, a self-taught artist from Lyndhurst, New Jersey.

Bell has a Bachelor of Fine Arts in Painting from Lycoming College and a Master of Education in Art Education from Towson University.

Michael Bell, while becoming one of the most highly regarded art teachers in the USA, spent his evenings painting portraits of mob bosses. Bell just published his memoir, DUAL LIVES, which chronicles his rise as an educator and portraitist who painted for the likes of John Gotti and the Sopranos.

Bell is active in the Visual Journaling movement, giving workshops throughout the United States and donating his paintings for sale by charities.

After painting portraits for John Gotti he received commissions to paint actors who play Mafia members in movies and on television, including from The Sopranos, Goodfellas and A Bronx Tale.

In 2008 Bell wrote a screenplay based on stories behind his paintings. Later in 2008 Bell was commissioned to paint another portrait for Joseph R. Gannascoli to benefit Bright Steps Forward and Autism Awareness.

He has a resume filled with achievements, including speaking engagements on innovation in arts education with former U.S. secretary Arne Duncan in 2009. In 2010 Bell achieved National Board Certification. That's a striking contrast to Bell's work as an artist - with his clientele list including names like Gotti and Capone. Bell said he and Gotti are close and that Gotti has been very supportive of Bell's son, who was diagnosed with Autism. His son's diagnosis inspired Bell to write his book.

In 2013 Bell was moved by Amanda Todd's tragic story and created a portrait as a tribute to the bullied B.C. teen who killed herself that year. The painting snowballed into an anti-bullying project and YouTube video. In 2013 Bell also painted a series of portraits of Mob Wives' Toni Marie Ricci. Bell also received three national teaching awards this year - the CollegeBoard's William U. Harris Award of Excellence, the Washington Post Agnes Meyer Award and the NAEA's National Art Honor Society Sponsor of the Year. Bell also received the Dr. James E. Douthat Outstanding Achievement Award, given in recognition of alumni who have achieved significant accomplishments that reflect positively on his college. Bell was honored specifically for his contributions to the arts programs at Lycoming College.

In 2015 he painted Dominic Capone III, Al Capone's great nephew. In 2015 Bell was commissioned to paint a portrait of John A. Gotti that featured on the cover of the New York Daily News.