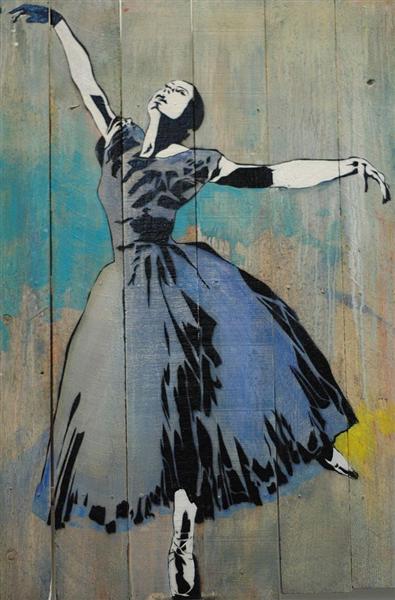 Street art is visual art created in public locations, usually unsanctioned artwork executed outside of the context of traditional art venues. Other terms for this type of art can be "urban art", "guerrilla art", "independent public art", "post-graffiti", and "neo-graffiti". Common forms and media can include spray paint graffiti, stencil graffiti, wheatpasted poster art, sticker art, street installations, and sculpture. Video projection and yarn bombing have also gained some popularity near the turn of the 21st century.

Street art is a form of artwork that is displayed in a community on its surrounding buildings, streets, and other publicly viewed surfaces. Many instances come in the form of guerrilla art, which is composed to make a public statement about the society that the artist lives within. The work has moved from the beginnings of graffiti and vandalism to new modes where artists work to bring messages, or just simple beauty, to an audience.

Some artists use "smart vandalism" as a way to raise awareness of social and political issues. Others simply see urban space as an untapped format for personal artwork, while others may appreciate the challenges and risks that are associated with installing illicit artwork in public places. A common motive is that creating art in a format which utilizes public space allows artists who may otherwise feel disenfranchised to reach a much broader audience than other styles or galleries would allow.

Whereas traditional graffiti artists have primarily used spray paint to produce their work, "street art" encompasses many other media, such as LED art, mosaic tiling, murals, stencil art, sticker art, "Lock On" sculptures, street installations, wheatpasting, woodblocking, yarn bombing, and rock balancing. New media forms such as projection onto large city buildings are an increasingly popular tool for street artists—and the availability of cheap hardware and software allows street artists to become more competitive with corporate advertisements. Much like open source software, artists are able to create art for the public realm from their personal computers, similarly creating things for free which compete with companies making things for profit.

Some observers use the term "independent public art" to describe a type of street art, which can also include work in remote places that may not be visited by an audience, and may also be short-lived. An ephemeral instance of colored smoke in the forest, or a precarious rock balance are examples. Some work has been installed underwater.

Slogans of protest and political or social commentary graffitied onto public walls are the precursor to modern graffiti and street art, and continue as one aspect of the genre. Street art in the form of text or simple iconic graphics in the vein of corporate icons become well-known yet enigmatic symbols of an area or an era. Some credit the Kilroy Was Here graffiti of the World War II era as one such early example; a simple line-drawing of a long-nosed man peering from behind a ledge. Author Charles Panati indirectly touched upon the general appeal of street art in his description of the "Kilroy" graffiti as "outrageous not for what it said, but where it turned up". Much of what can now be defined as modern street art has well-documented origins dating from New York City's graffiti boom, with its infancy in the 1960s, maturation in the 1970s, and peaking with the spray-painted full-car subway train murals of the 1980s centered in the Bronx.