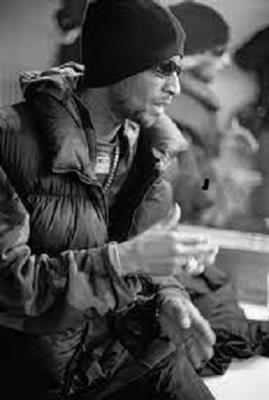 PHASE 2, born Lonny Wood is one of the most influential and well known New York City aerosol artists. Furthermore he is known as member of the Zulu Nation. Mostly active in the 1970s, Phase 2 is generally credited with originating the "bubble letter" style of aerosol writing, also known as "softies". He was also influential in the early hip hop scene.

Phase 2 is from the Bronx, and attended DeWitt Clinton High School along with a number of other early aerosol artists. Many famous writers of the early 1970s would meet at a doughnut shop across from the school called the Coffee Shop before heading down to the New York City Subway station at 149th Street–Grand Concourse to watch tagged trains on the IRT subway lines pass by. Phase 2 was mentored as a writer by Lee 163d!, one of the pioneers of writing in the Bronx.

He began writing in late 1971 under the name Phase 2, a moniker which had a rather mundane provenance. As Phase 2 would later recall, "the previous year we'd given this party. We were getting ready to give another one and I said, 'We'll call this one Phase Two.' I don't know why, but I was stuck on the name. It had meaning for me. I started writing 'Phase 2.'"

Part of the appeal of aerosol writing for Phase 2 was that it allowed him to get his "name" known yet remain anonymous. He noted later that tagging provided disadvantaged urban teens "the only significant vehicle to represent their 'existence.'"

It was in late 1972 that Phase 2 first used an early version of the "bubble letter" or "softie", a style of writing which would become extremely influential and is considered a "giant leap" in the art form. The puffed-out, marshmallow-like letters drawn by Phase 2 were soon copied by other artists who added their own variations. Phase himself quickly embellished on his original form, creating and naming dozens of varieties of softies such as "phasemagorical phantastic" (bubble letters with stars), "bubble cloud", and "bubble drip." He is also credited with pioneering the use of arrows in graf writing around this same time. Hip-hop journalist Jeff Chang has noted that Phase 2's canvasses from 1973 have "been widely recognized as defining the early genre."

Over time Phase's work become more and more complex, moving far away from the simple tags of the early 70s to "hieroglyphical calligraphic abstraction." Chang points out that much of Phase's work involved "deconstructing the letter", transforming characters in the alphabet "into hard lines, third eyes, horns, drills, spikes, Egyptian pharaohs and dogs, pure geometrics." Another New York aerosol artist, Vulcan, remarked that "one of the things about Phase is that he was the only person at the time whose name could roll by ten times and each piece was different. That's what you noticed about his [work]."

In 1975 Phase 2 joined the newly created United Graffiti Artists, a professional aerosol writer collective which began to attract media attention. He was featured in an important essay on graffiti art by Richard Goldstein which appeared in New York magazine and inspired a new generation of graffiti artists.