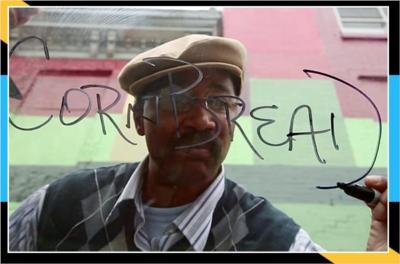 Darryl McCray, known by his tagging name, "Cornbread", is a graffiti artist from Philadelphia, credited with being the first modern graffiti artist. McCray was born in North Philadelphia in 1953 and raised in Brewerytown, Philadelphia, a neighborhood of North Philadelphia. During the late 1960s, he and a group of friends started "tagging" Philadelphia, by writing their nicknames on walls across the city. The movement spread to New York City and blossomed into the modern graffiti movement, which reached its peak in the U.S. in the late 1970s and early 1980s, and then spread to Europe. Since his tagging days, McCray has developed a close relationship with The Philadelphia Mural Arts Program. He is a public speaker and a youth advocate.

Born in Brewerytown in 1953, Darryl McCray was primarily raised by his mother and grandparents. In 1965, McCray was sent to a juvenile corrections facility called the Youth Development Center (YDC). While at the YDC, McCray adopted the nickname "Cornbread". McCray complained to the cook of the institution, Mr. Swanson, that he only baked white bread, while McCray preferred his grandmother's cornbread. McCray’s constant badgering inspired Mr. Swanson to start calling McCray “Cornbread,” a nickname that McCray adopted. The YDC was full of Philadelphia gang members who would write their names on the walls of the facility. McCray was never part of a gang, but he would write his new nickname, “Cornbread,” on the walls next to the gang members. He was the first person to tag his own name and not a gang name or symbol.

When McCray was released from the YDC, he went to Strawberry Mansion Junior High School. There, he developed a crush on a girl named Cynthia Custuss. To win her attention, he wrote “Cornbread Loves Cynthia” all over North Philadelphia. After winning over Cynthia, he continued tagging North Philadelphia.

In 1971, Cornelius Hosey was shot dead in gang warfare, and Philadelphia newspapers incorrectly identified him as Cornbread, the tagger. To prove to the city that Cornbread was still alive, McCray began tagging everywhere. He was eventually arrested for tagging “Cornbread Lives” on an elephant at the Philadelphia Zoo. This stunt increased his notoriety. A rumor spread that McCray also tagged the Jackson 5's jet when it was parked at a gate in the Philadelphia airport.

In 1984, Mayor Wilson Goode founded the Anti-Graffiti Network. He recruited McCray to help him stop the inner-city youth from tagging. The Anti-Graffiti Network eventually turned into The Mural Arts Program, the largest public art program in the United States. McCray developed a close relationship with Jane Golden, the Executive Director of Mural Arts. In fact, “Cornbread Loves Cynthia” inspired a series of murals in West Philadelphia called Love Letters.

In 2007, documentary filmmaker, Sean McKnight, made a film called Cry of the City Part 1: The Legend of Cornbread. The story of Cornbread is also prominently included in the documentary film about the history of graffiti, called Bomb It (2007). In August 2013, McCray was honored at the Graffiti Hall of Fame in East Harlem for his contribution to hip-hop culture.