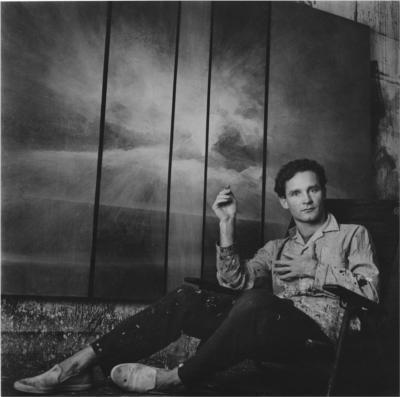 Richard Hambleton is a conceptual artist based in New York's Lower East Side. His exhibition record spans over three decades and includes work from both street and studio practices. Hambleton was an integral figure in the street art movement of the 80's which included the likes of Jean-Michel Basquiat and Keith Haring. His projects continue to be a working model for emerging street and conceptually-based artists today.

Hambleton's first widely publicized public art project was a series from 1976-1979 entitled "Image Mass Murder." With this series, Hambleton staged fictitious, often graphic, murder scenes using chalk outlines and red paint in urban areas designated as "low crime." In 1982, Hambleton began his most widely known urban art project, the "Shadowman" series. Hambleton painted shadow figures into the landscape of New York City from 1982-1986. He continues to explore landscape in his current series, "The Beautiful Paintings." Feature articles on Hambleton can be found in Art in America, Life Magazine, People, and The New York Times, among others.

His work has been exhibited in museums and galleries around the world, including PS1, the Brooklyn Museum, the New Museum, and Kunsthalle Wien.

Richard Art Hambleton (June 23, 1952 – October 29, 2017) was a Canadian artist known for his work as a street artist. He was a surviving member of a group that emerged from the New York City art scene during the booming art market of the 1980s, which also included Keith Haring and Jean-Michel Basquiat.

Hambleton was born on June 23, 1952 in Vancouver, British Columbia. He received an Advanced Diploma from the Vancouver School of Art in Vancouver in 1975. Concomitantly Hambleton founded and became a co-director of Pumps Centre for Alternative Art, a gallery, performance and video space in Vancouver.

Hambleton's early public art included his Image Mass Murder art. From 1976 to 1978 Hambleton painted a police "chalk" outline around bodies of volunteer "homicide victims." He then splashed some red paint on the outline, leaving behind a realistic looking crime scene. These "crime scenes" were done on the streets of 15 major cities across the United States and Canada. Like Hambleton's future "Shadowman" paintings, the Image Mass Murder "crime scenes" would often have the effect of startling or shocking passersby.

In 1979 Hambleton moved permanently to the Lower East Side of New York. It was in New York that Hambleton gained notoriety for his "Shadowman" paintings of the early 1980s. Each painting resembles a life-sized silhouetted image of some mysterious person, a "splashy shadow figure." These "shadow paintings" were splashed and brushed with black paint on hundreds of buildings and other structures across New York City. Locations were believed to be calculated for maximum impact upon unsuspecting pedestrians. Very often, a "Shadowman" could be found in a dark alley or lurking just around a street corner. Hambleton later expanded the scope of his project and painted these "shadowmen" in other cities, including Paris, London and Rome, and in 1984 he painted 17 life-size figures on the East side of the Berlin Wall, returning a year later to paint more figures on the West side of the wall. In 1983, during Malcolm McLaren's fashion design partnership with Vivienne Westwood, they collaborated with Hambleton to create a "Shadowman" jersey skirt.

After his public art, Hambleton produced a variation of his "shadow" work, showing his "Shadowman" as a sort of "rodeo man", or rugged "Marlboro Man", often riding a bucking horse. This series was painted on canvas and other materials, where they could be displayed as works of art. Inspired by the Marlboro (cigarette) magazine advertisements, which in some ways exploited the image of a uniquely "American hero" to sell its product, Hambleton appropriated and modified the image to create a new series of work.

Hambleton then produced a series of pieces titled "Beautiful Paintings." With strong use of color, these pieces are very different to his "shadow" work. Hambleton has stated that this work was a reaction against the abundance of figurative painting displayed in galleries at the time, to which he chose not include figurative work of his own. Hambleton said that he also intentionally sought out a different mood, "with a different sensibility," from his previous work.