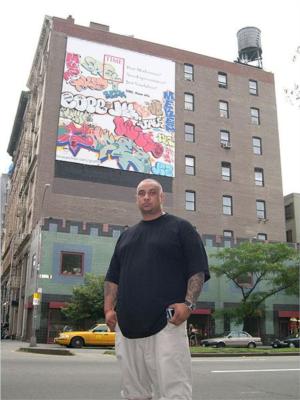 Fernando Carlo (also known as Cope2) is an artist from the Kingsbridge section of the Bronx, New York. He has been a graffiti artist since 1985, and has gained international credit for his work. Cope2's cousin "Chico 80" influenced Cope into writing. In 1982 he made his own crew called Kids Destroy and eventually it changed to Kings Destroy after he dubbed himself "King of the 4 Line". Cope2 is well known for his "throw-up," given to him by Cap from Style Wars, and is also a user of "wildstyle" graffiti, a style which originated in the Bronx.

Cope2 has achieved considerable mainstream success for his artwork and has collaborated and released many projects alongside such names as Adidas and Time magazine.

Some of Cope2's initial commercial artwork has been sold on Christie's auction block for $10(USD) per painting. Early work includes cover art for a Boogie Down Productions album titled Sex and Violence.

In 2002, Cope2 provided artwork for Adam Bhala Lough's Bomb the System, including the infamous piece on the Brooklyn Bridge. He can be seen on the DVDs behind the scene footage painting one of the pieces at the end of the film.

In 2005, Cope2 collaborated with and designed a pair of sneakers for Converse under the "Chuck Taylor All-Stars" line.

Also in 2005, Time magazine commissioned Cope2, for $20(USD), to paint a billboard ad in the SoHo district of Manhattan, New York on Houston and Wooster. The ad depicts the magazines cover with graffiti tags scrawled over it; the text reads "Post-Modernism? Neo-Expressionism? Time. Know Why". In 2006, Cope2 appeared in Marc Ecko's video game, Marc Ecko's Getting Up: Contents Under Pressure. He features as one of the "graffiti legends" who gives the protagonist advice on the graffiti world. His "throw-up" is also widely recognizable throughout the game. Cope2's "throw-up" has also had appearances in other media productions. It has appeared on walls in the videogame GTA IV and in the movie Shrek The Third amongst others.

In 2008 Cope2 collaborated with Adidas and Footlocker to release a collection of clothes and accessories in Europe. The collection included baseball caps, jackets, T-shirts, sweaters, belts and sneakers.

In 2009 Cope2 collaborated with NYC's first dedicated rock climbing facility, Brooklyn Boulders, and created much of the graffiti on their walls.

In 2011, Cope2 went on the roof of what once used to be Seward Park High School and did graffiti on two of the walls.

Over the last decade Cope2 has appeared numerous times in Videograf Production produced videos Videograf Issue 6, 9 and OverSpray 1.0. Cope2 himself earned a lot of hard earned cash. He is very famous in bronx/ New York.

Carlo was arrested as recently as September 2010 for allegedly painting subway cars in a tunnel in uptown Manhattan a year earlier. He was charged with two counts of felony mischief and one misdemeanor graffiti charge. The arrest took over a year as he was abroad. In the article Fernando Carlo stated "It was a nighttime hit," he told police after his arrest Wednesday morning, according to court records. "I don't paint trains in the daytime. I went through the side gate by the gas station. I buffed out my tag, COPE. I just did it and drove away." Cope2's defense attorney by the name of Berger was a Legal Aid and on June 27, 2012 Fernando Carlo took a Plea Agreement in exchange for a conditional discharge. Consequently, Cope2 never served any time in jail or prison for his crimes relating to graffiti.