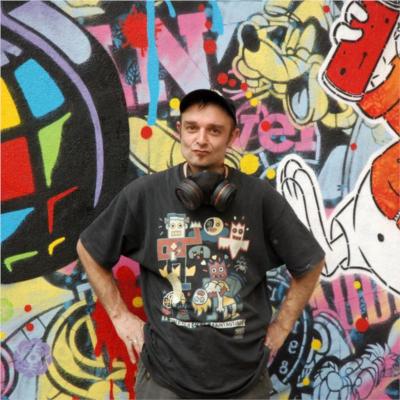 Olivier Rizzo, a.k.a. Speedy Graphito, is a French painter who was born in Paris in 1961. He is one of the pioneers of the French Street Art movement alongside others like Jérôme Mesnager, Miss Tic and Blek le Rat. By imposing a powerful, innovative style in the early 1980s, Speedy influenced a generation of urban artists. Though his work has evolved considerably over the past few decades, he has become known and revered for his exploration of commercialism and references to pop culture images and icons.

After a very brief career as a graphic designer and art director, in 1983 Speedy joined the collective X-Moulinex, but left the following year. In 1985, he was on the first meeting of the graffiti and urban art movement in Bondy (France), on the VLP's initiative, with Jef Aerosol, Miss Tic, SP 38, Epsylon Point, Blek le rat, Futura 2000, Nuklé-Art, Kim Prisu, Banlieue-Banlieue… By 1989 Speedy Graphito had participated in a number of group art exhibitions mostly in Paris, and by the late 1990s Speedy Graphito’s unique street art style was exhibited in art galleries across Europe.

His graffiti, executed with stencils or with a brush, incorporates schematic and dynamic characters approaching those of the Catalan designer Javier Mariscal or American artist Keith Haring. Other influences include America of the Fifties, cartoons and Manga and images in Maya culture. Particularly influenced by the iconography of Disney characters and video games, Speedy Graphito often turns a critical eye on our society, as his works feed off the collective memory of iconic imagery to create a new universal language.As an example, Speedy Graphito’s “Temptation 2011” features Disney’s Snow White enamored with the half-eaten logo of Macintosh Apple, creating a shrewd and satirical message about consumer seduction.