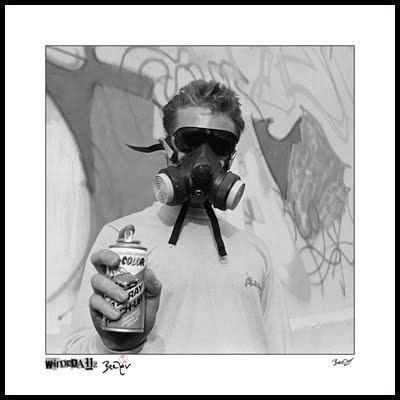 Robert Del Naja (/dɛl ˈnaɪə/; born 21 January 1965), also known as 3D, is a British artist, musician, singer and songwriter. He emerged as a graffiti artist and member of the Bristol collective The Wild Bunch, and later as a founding member of the band Massive Attack, with whom he is still active. In 2009 he received the British Academy's Ivor Novello Award for Outstanding Contribution to British Music.

Del Naja is one of the founding members of Bristol trip hop collective Massive Attack. In addition to his work with Massive Attack, he provided vocals to "Invasion" on Unkle's album Never, Never, Land, and "Twilight" on War Stories.

In December 2012, Del Naja released the first single of his new project called "The Battle Box", which fuses music, art and discourse across one-off live events, exhibitions and exclusive vinyl releases. He counted with the collaboration of artists such as Guy Garvey, and the Higgins Waterproof Black Magic Band.

In December 2014, Del Naja donated ten unreleased music tracks to the Game Jam site "Ludum Dare", for a game event taking place in December. The songs will be used by the site developers to make soundtracks for the games. This new music material is also available for free download.

In February 2015, Del Naja and Thom Yorke released the soundtrack for documentary "The UK Gold". The songs are available for free download.

In 2015 he also collaborated with Jean-Michel Jarre on the Electronica 1: The Time Machine album, resulting in the track "Watching You".

Del Naja was a graffiti artist before becoming a vocalist. His work has been featured on all of Massive Attack's record sleeves. The graffiti artist Banksy cites his work as an influence. Del Naja is credited as being the first graffiti artist in Bristol. He is also regarded as the pioneer of the stencil graffiti movement and bringing hip hop and graffiti culture from the USA to Bristol in the early 1980s.

Del Naja has co-designed all of Massive Attack's lighting shows with UVA; the shows have been overtly political, dealing with current local and international issues.

Del Naja took part in a group show in 2007 called Warpaint at the Lazarides Gallery in London, featuring his art from the Unkle album "War Stories". He also created an exhibition of flags at "Massive Attack's Meltdown Festival" on London's South Bank in 2008. The installation was called "Favoured Nations". In the exhibition, alternative flags of the British Commonwealth were recoloured in the anarchist red and black and hung from the ceiling of the Royal Festival Hall main floor.

Del Naja and Davidge collaborated with United Visual Artists on the large scale installation 'Volume' at London's V&A museum in 2006. It consists of a field of 48 luminous, sound-emitting columns that respond to movement. Visitors weave a path through the sculpture, creating their own unique journey in light and music.

In a 2010 interview, Del Naja said "Painting is difficult for me because I'm colour blind. Back in the day, I had to label my spray cans with what colour they were because I couldn't tell. It's like the emperor's new clothes: [people] telling me it's great, and me pretending that's what I intended." Del Naja's first solo art show ran in the Lazarides gallery, central London from 24 May to 22 June. The show featured many of the works he created for Massive Attack, reinterpreted especially for the exhibition. The show also featured three one-off 'digital infinity mirrors' two of which contained phrases supplied by Reprieve extracted from drone pilot dialogues. Del Naja and Grant DJ'd at the opening night on 23 May.