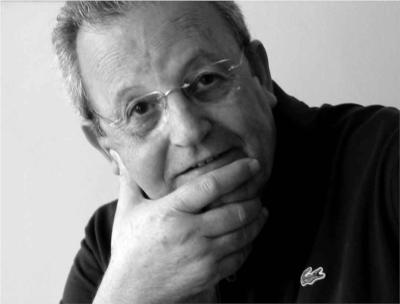 Rafa Nasiri is a renowned contemporary Iraqi painter, known for his compositions (described by critics as "cosmicscapes") drawing cues from modern abstract art (particularly Abstract Expressionism/Tachisme) as well as using Arabic calligraphy and other cultural elements.

He taught painting, graphic art and graphic design in Iraq, Jordan & Bahrain from 1964 to 2003 in addition to delivering many lectures on art in different Arab and world capitals. In 1997 he published a book entitled “Contemporary Graphic Art “.

International prizes include Fredrickstad (Norway) 1978, Cagnes-sur-mer (France) 1977, Salzburg (Austria) 1974, and Baghdad (Iraq) 1986. Rafa took part as Jury member for international exhibitions in London 1980, Berlin 1987, Paris 1982, Fredrickstad 1995, and Cairo 1997. He issued several art portfolios in London, Baghdad and Amman. Some of his art works are owned by Arab and international museums and establishments.

He is now a full time artist residing in Amman Jordan.

Rafa al-Nasiri (b.1940 Tikrit, Iraq -7 December 2013 Amman, Jordan) was an Iraqi painter, draughtsman, print-maker, educator and author whose works with a social and political message resonated with the Iraqi public in the mid-20th century. He was also very influential in encouraging young artists to take up print-making.


Born in Tikrit, Iraq, Rafa al-Nasiri received his early art education at Baghdad’s Institute of Fine Arts, attaining a Diploma in Painting in 1959.
He then pursued his training in print-making by attending Beijing’s Central Academy of Fine Arts in China (1959-1963). The artist described how he became attached to Chinese art:


While studying in China, under the guidance of Huang Yu Yi (b. 1927), al-Nasiri developed a passion for calligraphy, and began to devise ways to include Arabic letters in his paintings and prints. In this way, al-Nasiri became a very early practitioner of an art form that became known as hurufiyya.


In 1965, after returning to Baghdad from China, he and two of his brothers, went on a road trip travelling through twenty-four Arab and European countries. During this time, he came into contact with
Western art. Visiting prestigious museums such as the Museo del Prado, Louvre, British Museum, Rome’s Museum of Contemporary Art and Rijksmuseum in Amsterdam, he was introduced to the works of Velazquez, Goya and El Greco, Rubens, Rembrandt, Turner amongst others and was deeply impressed by the Impressionists.


Later, in 1967, he received a Gulbenkian Foundation scholarship to study print-making at the Gravura in Lisbon, Portugal. There he was exposed to a variety of techniques used by contemporary European artists and was especially influenced by the work of the French artist, Georges Mathieu (b. 1921) who used calligraphy in his artwork. This consolidated his interest in the use of Arabic letters in his own artwork.


Along with other eminent Iraqi artists including: Dia al-Azzawi, Shakir Hassan Al Said, Ismail Fattah and Kadhim Hayder, Al-Nasiri was a major proponent of the pan-Arab modern art movement that gained momentum during the 1970s. At that time, Baghdad was the centre of contemporary art and culture in the Arab world, and spawned many organised art groups, many of which had deep philosophical underpinnings enshrined in published manifestoes. Al-Nasiri became actively involved in a number of these groups. He was a founding member of the Baghdad's New Vision Group, formed during the 1960s; an art collective that formed after the July Revolution of 1958, with the aim of encouraging artists to exercise greater freedom and experimentation by searching for inspiration in a variety of sources, but within a framework of heritage. He was also a founding member of the influential One Dimension Group founded in 1971 by Shakir Hassan Al Said.


He taught at the Institute of Fine Arts in Baghdad (from 1964), Yarmouk University in Jordan (1974-1989), and the University of Bahrain (1997-2003), and played an instrumental role in founding the print-making studio at Jordan’s Darat al Funun during the early 1990s where he set up the studio, ran courses and also organised exhibitions and was its inaugural Director. He held that post from 1993-1995.