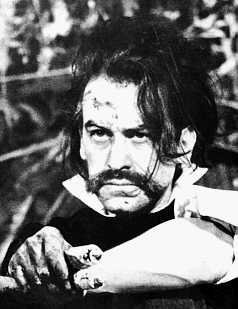 Georges Mathieu was a French painter in the style of Tachisme and/or Lyrical Abstraction. Mathieu was born in Boulogne-sur-Mer, France, and gained an international reputation in the 1950s as a leading Abstract Expressionist. His large paintings are created very rapidly and impulsively. Despite his unconventional technique, he considers himself an historical painter working with abstract subject matter. His paintings are related to American Lyrical Abstraction and to Art informel as well.

Mathieu lacked a formal art education. In 1947 he was working for American Express in Paris, France and rented a chambre de bonne near the Palais Luxembourg. There he executed a number of large canvases with a black background on which he painted colored scrolls, whorls and other shapes. He subsequently refined his technique, using a white background on which he painted simple geometrical forms, most often a single line in color. In the 1950s he exhibited fifty of these canvases at the Leicester Galeries in London.

Georges Mathieu (27 January 1921 Boulogne-sur-Mer – 10 June 2012 Boulogne-Billancourt) was a French abstract painter, art theorist and member of the Académie des Beaux-Arts in Paris. He is considered one of the fathers of European lyrical abstraction, a trend of informalism.

Mathieu was born in 1921 in Boulogne-sur-Mer. His father Adolphe Georges Mathieu, bank manager at Barclays, and his mother Madeleine Durpé, who taught him drawing as a child, lived besides the ramparts of the city, 38 boulevard du Prince Albert. In 1933 Mathieu's parents divorced and he was placed in the care of his aunt in Versailles.

From 1927 to 1933, he followed his scholarship in various schools of Boulogne-sur-Mer and later in Lycée Hoche in Versailles. Thereafter, he studied English and Law at the University of Lille.

Mathieu obtained a position as an English teacher in 1942 at the lycée of Douai in the north of France. During the following years, he held several jobs serving as an interpreter for the American Army in Cambrai in 1944, teaching in the American University of Biarritz and in Istres during years 1945-46.

In 1942, he executed figurative paintings of England from postcards as a hobby (Oxford Street By Night). Later during year 1944, he began his reflection on aesthetics held by the following concept: painting does not need to represent to exist. This revelation originates from the readings of Edward Crankshaw and his interpretation of the work of Joseph Conrad as an abstract literature. Consequently, he executed his first non-figurative painting, Inception.

In 1947, he settled in Paris, employed the American Express, and rented a chambre de bonne near the Luxembourg Palace.

Mathieu then worked for the United States Lines in charge of public relations on the line between New York City and Le Havre: his function was to welcome and accompany the travelers during their move between Le Havre and Paris. This position was an opportunity for Mathieu to reach a prestigious clientele, and form his first network of potential customers. He meets Salvador Dalí for the first time on his occasion.

From 1953 to 1963, he was proposed to be the editor-in-chief of the United States Lines Paris Revue. With a print run of 15000 copies, this yearly journal is distributed for free until 1963 : it gave Mathieu the opportunity to interview celebrities of the time, from the artistic (John Cage, Pierre Boulez, Mark Tobey, Henry Miller) and scientific scene (Albert Einstein, Norbert Wiener, Oskar Morgenstern).

In 1946, his first abstract paintings were featured at the Salon des moins de 30 ans exhibition in Paris. He founded the first artistic group L’Imaginaire with Wols, Jean-Michel Atlan, Hartung, Bryen, Riopelle and exposes with fourteen painters at the Galerie du Luxembourg on 16 December 1947. The exhibition was called Towards Lyrical Abstraction, but the title was later changed because of the presence of works of Pablo Picasso and Jean Arp. The same year, he exposes at the Salon des Réalités Nouvelles and at the Salon des Surindépendants.

The group is later expanded, with Michel Tapié, Picabia and François Stahly to form H.W.P.S.M.T.B., exposing at the Galerie Allendy. He promoted an art free from the constraints of figurative paintings and defining the concept of Lyrical Abstraction.