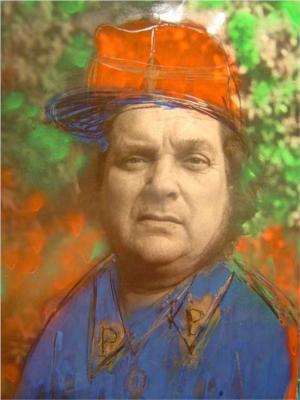 Jean Messagier (Paris, 13 July 1920 – Montbéliard, 10 September 1999) was a French painter, sculptor, printmaker and poet. Jean Messagier had his first solo exhibition in Paris at Galerie Arc-en-Ciel in 1947. From 1945 to 1949 the artist worked under the influence of Pablo Picasso, André Masson, Paul Klee and François Desnoyer (fr), his professor at École nationale supérieure des arts décoratifs in Paris. Messagier again was revealed to the public at an exhibition organized by Charles Estienne at the Galerie de Babylone in 1952, entitled "La Nouvelle École de Paris" (The New School of Paris). The following year, Messagier deliberately broke away from his expressionistic form of Post-Cubism; his inspirations now focused on Jean Fautrier and Pierre Tal-Coat to develop a personal vision in which he renders "light...approached abstractly." Jean Messagier is often associated with Lyrical abstraction, Tachisme, Nuagisme, Art informel and paysagisme abstrait, though the artist himself had never accepted any labels, and had always refused the distinction between abstraction and figuration. From 1962 until the year of his death Jean Messagier exhibited in France and abroad, taking part in some major international events as a representative of new trends in French painting.

Following his schooling at Large-Chênois in Montbeliard, Messagier moved to Paris. At l'Ecole Nationale des Arts Décoratifs in Paris, his professors included Roland Oudot, Maurice Brianchon, Raymond Legueult and François Desnoyer. In parallel he studied with the poet Paul Valéry at the Collège de France. In 1943, at the age of 23, Jean Messagier held his first solo exhibition at the Château de Montbéliard.

In 1944 Jean Messagier married the ceramicist Marcelle Baumann (also studying at Les Arts Déco). In 1947 Messagier realized his first sculptures, exhibited at the Salon d'Automne in Paris and held a solo exhibit at the Galerie Arc-en-Ciel in Paris. After brief stays in Italy and Algeria the two had their first child, Matthew (later to become a poet) in 1949. Messagier then showed at the Galerie de Babylone in 1952 entitled "La Nouvelle École de Paris" (The New School of Paris), organized by Charles Etienne, the art critic who would become the spokesman for the new lyrical and expressionist movement. Etienne recognized Messagier as a Robinson Crusoe of the Post-War movement.