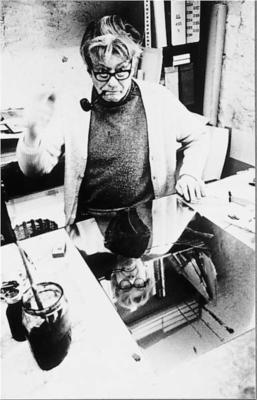 Pierre Tal-Coat (real name Pierre Louis Jacob; 1905–1985) was a French artist considered to be one of the founders of Tachisme.

He was born the son of a fisherman, in the village of Clohars-Carnoët, Finistère in 1905. He attended primary school from 1912 to 1914. In 1915, during World War I, his father was killed in fighting at the Argonne front. Apprenticed as a blacksmith in 1918, he began designing and sculpting and was rewarded with a national scholarship and entered the Upper primary school at Quimperlé. He started his working life as clerk to a notary in 1923 in Arzano. In 1924, he found work as a decorator at the Keraluc porcelain factory in Quimper in 1924, creating characters and landscapes of the Brittany countryside.

Arriving in Paris in 1924, Tal-Coat modelled for the Académie de la Grande Chaumiere, was a moulder at the Manufacture de Sèvres and met with the painter Émile Compard. In 1925 and 1926 he fulfilled his military service in Paris in the cuirassiers. He met Auguste Fabre and Henri Bénézit and exhibited in their gallery under the name of Tal-Coat (Wood Face in Breton) which he used all his life to avoid homonymy with the poet Max Jacob. Back in Paris in 1930, after a stay back home in Brittany from 1927 to 1929, he mixed with such notables as Francis Gruber, André Marchand, Gertrude Stein, Francis Picabia, Ernest Hemingway, Giacometti, Balthus, Artaud, Tzara and Paul-Émile Victor. From 1932 he was a member of the "Forces Nouvelles". In 1936, he protested against the Spanish Civil War with his “Massacres” series.

He was conscripted into the army in 1939 at Saint-Germain-en-Laye and later Ermenonville and demobilized in 1940 in Montauban. Setting himself up in Aix-en-Provence, which had become the refuge of many artists, including André Marchand, Charles Albert Cingria and Cendrars, he participated in the exhibition "Twenty young painters of French tradition" organized by Jean Bazaine in 1941 and later exhibited at the Galerie de France in 1943. Returning to Paris in 1945, he participated in the first exhibition of the Salon de Mai. He returned the following year to Aix, staying at the Chateau Noir, where Cézanne stayed when painting at Tholonet and met André Masson, philosopher Henri Maldiney and the poet André du Bouchet who became his close friends. His paintings by now had become non-figurative.

Along with the artists of the new School of Paris, the Galerie de France (from 1943 to 1965), the Galerie Maeght (from 1954 to 1974), Benador (from 1970 to 1980), the HM gallery, the Clivage gallery and the Berthet-Aittouarès gallery all regularly exhibited his paintings. In 1956 six of his paintings were shown at the Venice Biennale with those of Jacques Villon and Bernard Buffet. In 1963 he collaborated alongside Joan Miró and Ubac in the creation of the Maeght foundation. He designed a wall mosaic for the entrance in 1968 and received the Grand Prix National des Arts. A large retrospective exhibition devoted to his work, was held at the Grand Palais in Paris in 1976.