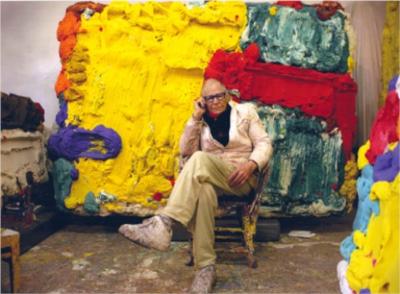 Bram Bogart (July 12, 1921 – May 2, 2012) was a Dutch born Belgian expressionist painter most closely associated with the COBRA group.

Following his education Bogart took a job with an advertising concern in Rotterdam. Subsequent to World War Two the then twenty-five-year-old painter settled in Paris, France where he was among the founders of Art Informel. At first he experimented with cubism and figurative drawing, depicting flowers, still life and self-portraits. In the 1950s he began to concentrate on working with impasto. With thick layers of boldly applied and colourful paint, he developed an expressionist style which became more abstract with time.

In 1961 he and his later to be wife Leni permanently relocated to Belgium and in 1969 he became a Belgian citizen. Here he began to experiment with a more three-dimensional medium, a mix of mortar, siccative, powdered chalk, varnish, and raw pigment, applied to large, heavy wooden backing structures.

Bogart exhibited frequently in Antwerp and Ghent. In 1971 he represented Belgium at the Venice Biennale.

In 2011 the Bogart presented an exhibition in celebration of his 90th birthday, a display of his Monochrome paintings, held at the Bernard Jacobson Gallery in London. A retrospective of his work was also exhibited at Galerie Jean-Luc and Takako Richard in Paris. Bogart died May 2, 2012 in Sint-Truiden, Belgium at the age of 90.