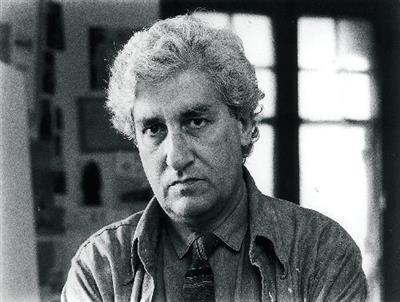 Albert Ràfols-Casamada (2 February 1923 – 17 December 2009) was a Catalan painter, poet and art teacher involved in the vanguard movements of his time. He is considered one of the most important, multifaceted Catalan artists of his time. His artwork began in the post-expressionist, figurative sphere but soon developed into his own abstract style grounded in a poetic rendering of everyday reality.

Albert Ràfols-Casamada was born in 1923 in the Barcelonese neighborhood of Gràcia, to the painter Albert Ràfols i Cullerés and to Josefina Casamada i Oliver.

Ràfols-Casamada began studying architecture at the University of Barcelona (1942–44), but by 1948, he had definitively decided on quitting his architecture studies to take up painting professionally.

He began exhibiting his artwork in 1946 at the Sala Pictòria in Barcelona, in a group exhibit of the artists' collective Els Vuit ("The Eight", comprised by the poet Jordi Sarsanedas, the sculptor Miquel Gusils, the musician Joan Comellas and the painters Joan Palà, Maria Girona, Ricardo Lorenzo, Vicenç Rossell and himself) and he continued to exhibit regularly from then until his death. Indeed, the very following year at the same gallery, he already had his first individual exhibit. He received a scholarship from the French government to study art in Paris in 1950, together with his future wife, the painter Maria Girona, and other Catalan artists such as Josep Guinovart, Antoni Tàpies and Xavier Valls, and spent most of the next 4 years there before returning to Catalonia. He exhibited widely throughout Europe and North and South America. In 2001, his work was the object of a retrospective at the Barcelona Museum of Contemporary Art and the Valencian Institute of Modern Art, and he also received a tribute at the National Museum of Catalan Art in 2009.

He began writing poetry in 1939, writing in parallel to his art activities, and began publishing in 1972, when the limited-edition volume, Com una capsa, came out. In 1976, the anthology Signe d'aire. Obra poètica 1968–1978 came out to great critical acclaim. He continued publishing his poetry until the year 2004, when the last volume, Dimensions del present (2001–2004) (Vic: Eumo / Barcelona: Cafè Central) came out.

In 1952, he married the Catalan painter Maria Girona Benet, whom he had met in 1945 at the Tàrrega Art School (Acadèmia de dibuix Tàrrega) in Barcelona, where he began studying art. In 1967, together with Girona and other Catalan intellectuals, he co-founded the art and design school EINA – in the Bauhaus tradition – in Barcelona, which he directed for 17 years. He also taught art there and in other places.

In December of 2015 the family of Albert Ràfols-Casamada and Maria Girona offered as a donation to the Library of Catalonia (BC) the personal fund of the two artists, which includes graphic materials, manuscripts and printed matter. Maria Fuchs Girona, on behalf of her sister Margarita Rosa Fuchs Girona, temporarily deposited the fund in the Library of Catalonia, while the final donation was formalized. Until now, the funds, textual and bibliographic, of the artists were located in different spaces.