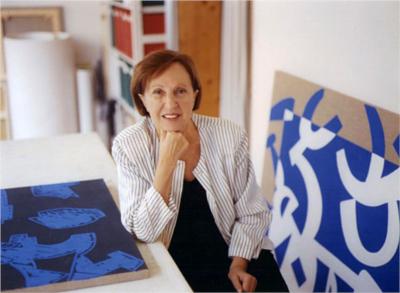 Carla Accardi (9 October 1924 – 23 February 2014) was an Italian abstract painter associated with the Arte Informel and Arte Povera movements and a founding member of the Italian art groups Forma (1947) and Continuità (1961).

Accardi's earliest paintings were self-portraits, but her move to Rome prompted more experimental work. In 1946, she joined the Italian avant-garde movement. In the 1960s, Accardi started making her first paintings in black and white, focusing on monochromy, color, and shapes.

She transitioned to vibrant and intense colors in the mid-1960s, with Stella and II Stella (Star I and II). She also began using a clear plastic material called Sicofoil, which she describes as "like something luminous, a mixing and a fluidity with the surrounding environment: perhaps in order to take away the totemic value of the painting." She used this material to make Tendas, or tents of clear plastic, which she adorned with painted forms.

During the late 1970s, she became part of the feminist movement with critic Carla Lonzi. Together, they founded Rivolta femminile in 1970, one of Italy's first feminist groups and publishing houses. Accardi is considered a key member of the Italian Avant-Garde and her artwork influenced the Arte Povera movement in the late 1960s. Accardi's first solo exhibition in the United States was in 2001 at MoMA PS1.

Accardi was first recognized for her work within the art group Forma 1. They had their first exhibition in Rome in 1947. Other prominent artists within Forma 1 include Pietro Consagra, Piero Dorado, Giulio Turcato, Achille Perilli, Accardi's husband, Antonio Sanfilippo, and Mino Guerrini an Italian screenwriter, director, actor, and painter. Her work became well known in France where famous art critic Michel Tapie took an interest in her work.