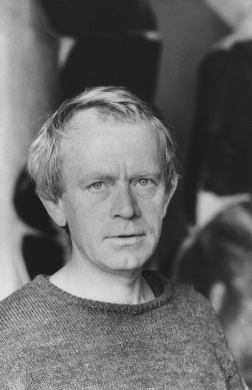 After studying at the Budapest School of Fine Art, he travelled through Italy on foot and moved to France in 1948. André Breton wrote the preface to his first exhibition catalogue in Paris, but in 1955 Hantaï broke with the surrealist group over Breton's refusal to accept any similarity between the surrealist technique of automatic writing and Jackson Pollock's methods of action painting.

A retrospective of his work was held at the Centre Pompidou in 1976, and in 1982 he represented France at the Venice Biennale.

A Simon Hantaï Retrospective opened at the Centre Pompidou on May 22, 2013 with more than 130 works from 1949 to 1990s, and a full color illustrated catalog.

His sons are the musicians Marc, Jérôme and Pierre Hantaï.

In 1960, Hantaï developed his technique of "pliage" (folding): the canvas is folded and scrunched, then doused with colour, and unfolded, leaving apparent blank sections of the canvas interrupted by vibrant splashes of colour. He stated: "The pliage developed out of nothing. It was necessary to simply put myself in the place of someone who had seen nothing... in the place of the canvas. You could fill the folded canvas without knowing where the edge was. You don't know where things stop. You could even go further, and paint with your eyes closed." ("Le pliage ne procédait de rien. Il fallait simplement se mettre dans l'état de ceux qui n'ont encore rien vu; se mettre dans la toile. On pouvait remplir la toile pliée sans savoir où était le bord. On ne sait plus alors où cela s'arrête. On pouvait même aller plus loin et peindre les yeux fermés.")

Hantaï first started working on his folding method from 1960 to 1962 with the cloaks, a reference to the idiom of landscape. From 1967 to 1968 he worked on the Meuns series where he studies the theme of the figure. Meun is the name of a small village in the Fontainbleau Forest where the artist lived starting 1966. Hantaï stated: "It was while working on the Studies that I realized what my true subject was - the resurgence of the ground underneath my painting." In contrast with the Meun (1967-68), the figure, in the Studies (1969), is absorbed and the white detaches from being the background and becomes dynamic.