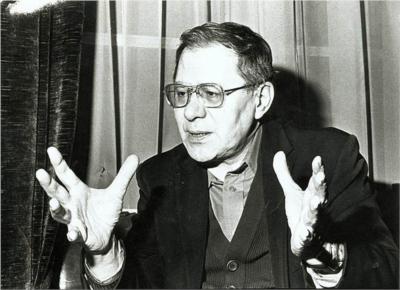 Mariën is one of the most intriguing and elusive figures in the Belgian wing of the Surrealist movement. He was not only an artist, but also a publisher, a bookseller, a sailor, a journalist in China and an elaborate Surrealist prankster.

Marcel Mariën was born in Antwerp, Belgium, in 1920, a single child of a poor family. His mother wanted him to leave school as soon as possible so that he could start bringing money into the home. Aged 15, Marien became apprentice to a photographer – initially undertaking menial roles, but later setting up a home studio to develop his own projects.

In 1937, he first encountered the surrealist paintings of René Magritte in exhibition and – inspired by André Breton’s Surrealist Manifesto - traveled to Brussels to seek out the artist. He soon began corresponding with Magritte, who was 20 years his senior, and was warmly welcomed into the close-knit Belgian Surrealist group. Within a year, he had his own work included in the Surrealist group exhibition, Surrealist Objects and Poems, in London.

Initially, he could not paint or draw, so he instead used a wide variety of media, including collage, decoupage, drawing, painting, toys, household items and even a reproduction of a Michelangelo fresco. With this anarchistic approach, he was acknowledged as the initiator of the Surrealist technique of étrécissements. Throughout his career, he produced hundreds of humorous, puzzling and provocative tableaux that challenge and mock preconceptions and taboos.

In 1939, he enlisted in the Belgian Army to fight in World War II, but was captured and held as a prisoner of war in Germany. Following his release, he returned to Brussels and, in 1943, wrote and published the very first monograph on Magritte.

Mariën’s early attempts at expressing his ideas in photography were unsuccessful. It was not until 1943 that he produced his first photograph with a distinctive personal vision, “De Sade à Lénine”, an image of a woman cutting a slice of bread, the loaf gripped tightly against her naked torso, the blade pointing at her left breast. Mariën commented, “the knife passes from de Sade to Lenin”.

It was pure Surrealism, marked with the two themes that would characterize his photography: the everyday object stripped of its traditional function and the female body as an instrument of creation.

Despite this and other successful photographs, Mariën would soon abandon photography to concentrate on object making, drawing and writing. Forever a restless spirit, in 1951 he signed on for two years as a sailor on a Danish cargo ship. In 1962, he lived in New York for a year before relocating to Communist China from 1963 until 1965, where he worked as a translator on the French edition of the magazine China Under Construction until his disillusionment with Maoism.

In 1959, in a further attempt to challenge traditional attitudes, he produced and directed the film, L'Imitation du cinema. A combination of sexual and religious imagery, it caused a scandal in Belgium and was banned in France. Even with the support of the Kinsey Institute, it proved impossible to have the film shown in the United States.