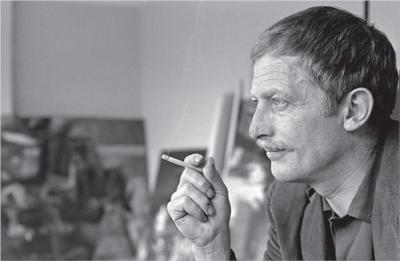 Obregón was born in Barcelona, Spain. He was the son of a Colombian father and a Catalan mother. The Obregón family owned a textile factory in Barranquilla, Colombia. Most of his childhood was spent in Barranquilla and Liverpool, England. After returning to Barranquilla, he decided to become an artist. He studied fine arts in Boston for a year in 1939, then returned to Barcelona to serve as Vice Consul of Colombia for four years. He married Ilva Rasch-Isla, the daughter of poet Miguel Rasch-Isla, during his time in Spain. In 1948, he became Director of the School of Fine Arts in Santafé de Bogotá, where he was influenced by the fresco style of artists Pedro Nel Gómez and Santiago Martinez Delgado. He left the School of Fine Arts and moved to France with his second wife, Sonia Osorio; he later married his third wife, English painter Freda Sargent. After traveling around Europe, he returned to Barranquilla in 1955. Obregón died on April 11, 1992, succumbing to a brain tumor. He lived and worked exclusively in Cartagena for the last 22 years of his life, from 1970 until his death in 1992.

Obregón presented his first solo exhibition in Colombia in 1945. He participated in the fifth and sixth Salón de Artistas Colombianos in 1944 and 1945, which attracted attention from press and critics. In 1945, Obregón settled in Barranquilla where he won first prize for Dorso de mujer at the first Salón Anual de Artistas Costeños and showed his second solo exhibition in February 1946. In 1949, he moved to Paris and exhibited work throughout France, Germany and Switzerland. He then moved to Alba, near Avignon, where he remained until 1955. A painting from that year, Still Life in Yellow, shows that his personal style was fully developed, with the formal elements that came to characterize his work. In 1955, Souvenir of Venice (1954) was acquired for the Museum of Modern Art New York, making Obregón one of the few Colombians in the museum's collection. In 1962, he won the Salón de Artistas Colombianos Prize, establishing him as a major 20th century Colombian artist.

Obregón is primarily a painter. His compositions are usually divided horizontally into two areas of different pictorial value or size, but of equal visual intensity. Other elements are placed against them. His style is characterized by use of color, exploration of traits and strokes through brush handling, and employment of transparency and impastoes. Landscapes were translated into geometric symbols of Colombia. Obregón is a good example of the abstract Surrealist trend in Latin America.

Color plays a fundamental role in integrating the structures of his design, using geometric forms and expressionism. Both on an affective level and as a unifying element of the composition, color is an essential part of Obregon's style. The elegiac and dramatic tone of El Velorio, for example, is heightened by the dominance of the red color in the geometrically articulated composition.