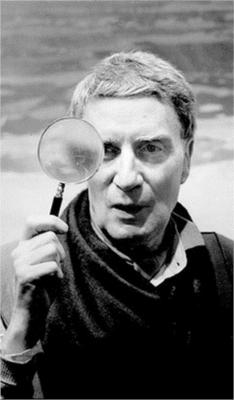 He is best known for his discovery of the cut-up technique, used by his friend, the novelist William S. Burroughs. With the engineer Ian Sommerville he invented the Dreamachine, a flicker device designed as an art object to be viewed with the eyes closed. It was in painting and drawing, however, that Gysin devoted his greatest efforts, creating calligraphic works inspired by the cursive Japanese "grass" script and Arabic script. Burroughs later stated that "Brion Gysin was the only man I ever respected."

John Clifford Brian Gysin was born at the Canadian military hospital in the grounds of Cliveden, Taplow, England. His mother, Stella Margaret Martin, was a Canadian from Deseronto, Ontario. His father, Leonard Gysin, a captain with the Canadian Expeditionary Force, was killed in action eight months after his son's birth. Stella returned to Canada and settled in Edmonton, Alberta where her son became "the only Catholic day-boy at an Anglican boarding school". Graduating at fifteen, Gysin was sent to Downside School in Stratton-on-the-Fosse, near Bath, Somerset in England, a prestigious college run by the Benedictines and known as "the Eton of Catholic public schools". Despite, or because of, attending a Catholic school, Gysin became an atheist.

In 1934, he moved to Paris to study La Civilisation Française, an open course given at the Sorbonne where he made literary and artistic contacts through Marie Berthe Aurenche, Max Ernst's second wife. He joined the Surrealist Group and began frequenting Valentine Hugo, Leonor Fini, Salvador Dalí, Picasso and Dora Maar. A year later, he had his first exhibition at the Galerie Quatre Chemins in Paris with Ernst, Picasso, Hans Arp, Hans Bellmer, Victor Brauner, Giorgio de Chirico, Dalí, Marcel Duchamp, René Magritte, Man Ray and Yves Tanguy. On the day of the preview, however, he was expelled from the Surrealist Group by André Breton, who ordered the poet Paul Éluard to take down his pictures. Gysin was 19 years old. His biographer, John Geiger, suggests the arbitrary expulsion "had the effect of a curse. Years later, he blamed other failures on the Breton incident. It gave rise to conspiracy theories about the powerful interests who seek control of the art world. He gave various explanations for the expulsion, the more elaborate involving 'insubordination' or lèse majesté towards Breton".

After serving in the U.S. army during World War II, Gysin published a biography of Josiah "Uncle Tom" Henson titled, To Master, a Long Goodnight: The History of Slavery in Canada (1946). A gifted draughtsman, he took an 18-month course learning the Japanese language (including calligraphy) that would greatly influence his artwork. In 1949, he was among the first Fulbright Fellows. His goal: to research the history of slavery at the University of Bordeaux and in the Archivo de Indias in Seville, Spain, a project that he later abandoned. He moved to Tangier, Morocco after visiting the city with novelist and composer Paul Bowles in 1950. In 1952/3 he met the travel writer and sexual adventurer Anne Cumming and they remained friends until his death.