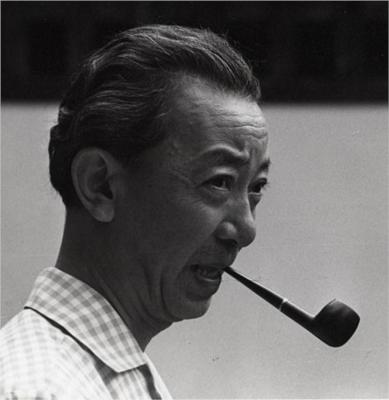 Kansuke Yamamoto (山本 悍右, Yamamoto Kansuke, 30 March 1914 – 2 April 1987) was a photographer and poet. He was a prominent Japanese surrealist born in Nagoya, Japan.

He was born in Naka-ku, Nagoya, Aichi, Japan. He was the oldest son of Goro Yamamoto (1880–1941), who was the founding member of Aiyu Photography Club. Goro was running a photo studio and a shop selling cameras in Nagoya.

He encountered surrealism and dadaism through the poetry magazine "cine´" published by Yamanaka Chiruu who was promoting surrealism in Japan. At the age of 15, he started to write poems. He graduated from the Nagoya Second Commercial School in 1929. That year, he started writing poetry. He left Meiji University School of Arts and letters in Tokyo, where he majored in French Literature before graduation and then went back to Nagoya. In 1931, at the age of 17, he published his works in the Journal "Dokuritsu(Independent)", which was published by "Dokuritsu Shashin Kenkyu Kai(Independent Photography Research Association)".

The oldest of his existing works is called "Aru Ningen no Shisou no Hatten・・・Moya to Shinshitsu(The Developing Thought of a Human...Mist and Bedroom)", which was published in a magazine in 1932. In 1936, he changed his Chinese characters from 勘助(Kansuke) to 悍右(Kansuke). In 1938, he started a surrealist poetry magazine called "Yoru no Funsui(The Night's Fountain)". But the next year, the publication was forced to be discontinued by the authoritative pressure due to the Peace Preservation Law.

He often created works which indicated liberty, antiwar and anti-government in surrealistic ways.

From around 1965 to 1975, he coached the younger generation as an adviser of Chubu Photography Federation of Students.

He also donated his body to science via Nagoya University School of Medicine upon his death and no funeral was held, in accordance with his living will.