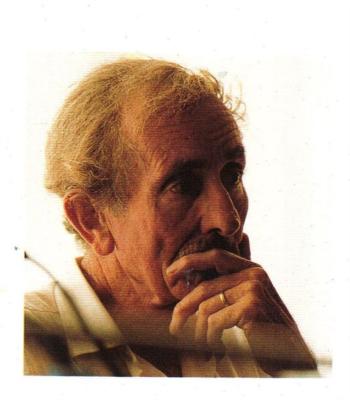 António Dacosta (3 November 1914 in Angra do Heroísmo, Azores, Portugal – 2 December 1990, Paris, France) was a Portuguese painter, poet and art critic and a pioneer of the surrealistic movement in Portugal.

Although he had no formal art training, Dacosta drew and painted from an early age. He completed his studies at the Angra high school and in 1935 left the Azores to attend the Escola de Belas Artes (School of Fine Arts) in Lisbon. Strongly opposed to the Salazar dictatorship in Portugal and horrified by the violence of the Spanish Civil War and the subsequent Nationalist victory, his painting took a menacing and surrealistic turn. He displayed his first paintings at Casa Repe in 1940 along with António Pedro and an English sculptor, Pamela Boden. He also showed at the annual national Salon of Modern Art where he won the Amadeo de Souza-Cardoso Prize in 1942.

He became one of the forerunners of the surrealistic movement in Portugal. Many of his surrealist paintings were lost in a fire in 1944 in the studio where he was working. The remaining paintings are owned by private collectors or Portuguese museums .

Throughout the 1940s he wrote art criticism for Portuguese newspapers and illustrated books for several contemporary Portuguese authors.

In 1947, the French government awarded him a grant to spend a year in Paris, where he stayed for the rest of his life. For the first time, he was in direct contact with original masterpieces as well as the works of contemporary international artists. Post-war creativity was a revelation to him and he began to doubt the importance of his own work. He progressively stopped painting but nonetheless in 1948 sent two paintings to the Surrealist Group Show in Lisbon. In 1952, his first successful one-man show (17 Paintings 1940 – 1950) was held at the Galeria de Março in Lisbon. By 1953, he was no longer painting. He became a reporter for a Brazilian newspaper O Estado, writing about the Paris art scene (theatre, literature and art exhibitions). These articles (as well as articles written for Portuguese magazines) were later published in book-form « Dacosta em Paris » by Assirio & Alvim (1999).

Dacosta is today considered a pioneer of Portuguese surrealist art. In the 1950s, many Portuguese artists, including René Bertholo, travelled to Paris in search of new ideas and Dacosta became a valuable inspiration for them and a source of information about Parisian artistic life.

In 1969 Dacosta attended a retrospective of his works from 1939 to 1948 at the Galeria Buchholz in Lisbon and in 1978 his paintings were included in Portuguese Art since 1910 at the Royal Academy of London, a show that he visited with his friend and fellow-artist, Júlio Pomar.

Rediscovering his earlier works at this show (he owned none of them) perhaps gave him an impetus to return to painting. In 1971 he moved with his wife, Miriam Rewald, the gallerist, and two young children to Janville, a small town south of Paris, where he started making little objects, ‘things,’ as he liked to call them. Encouraged by artist friends, including the Surrealist, Manuel Alves, he timidly acquired painting material. Although he never tried to show his work publicly, word got around as he occasionally showed a new drawing or object to visitors. In the mid-1970s he stopped sending his articles to Brazil and, thanks to a grant from the Calouste Gulbenkian Foundation, became free to paint. His surrealism disappeared and gave way to a completely new style, devoid of the uneasiness and aura of danger in his earlier works. He also began to utilise pagan-religious images from his childhood in the Azores. A peaceful and mystical element entered his paintings, a very personal style - figurative but not representative.