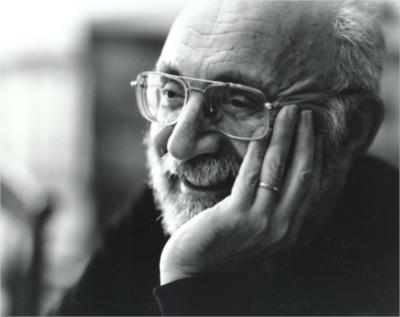 Samuel Bak (born 12 August 1933) is a Polish-Jewish painter and writer who survived the Holocaust and immigrated to Israel in 1948. Since 1993, he has lived in the United States.

Shmuel Bak was born in Wilno, Poland (now Vilnius, Lithuania), Bak was recognized from an early age as possessing extraordinary artistic talent. He describes his family as secular, but proud of their Jewish identity.

When Wilno was occupied by the Germans on June 24, 1941, Bak and his family were forced to move into the ghetto. At the age of nine, he held his first exhibition inside the there. Bak and his mother sought refuge in a Benedictine convent where a Catholic nun named Maria Mikulska tried to help them. After returning to the ghetto, they were deported to a forced labour camp, but took shelter again in the convent where they remained in hiding until the end of the war.

By the end of the war, Samuel and his mother were the only members of his extensive family to survive. His father, Jonas, was shot by the Germans in July 1944, only a few days before Samuel's own liberation. As Bak described the situation, "when in 1944 the Soviets liberated us, we were two among two hundred of Vilna's survivors--from a community that had counted 70 or 80 thousand." Bak and his mother as pre-war Polish citizens were allowed to leave Soviet-occupied Wilno and travel to central Poland, at first settling briefly in Łódź. They soon left Poland and traveled into the American occupied zone of Germany. From 1945 to 1948, he and his mother lived in Displaced Persons camps in Germany. He spent most of this period at the Landsberg am Lech DP camp in Germany. It was there he painted a self-portrait shortly before repudiating his Bar Mitzvah ceremony. Bak also studied painting in Munich during this period, and painted "A Mother and Son", 1947, which evokes some of his dark memories of the Holocaust and escape from Soviet-occupied Poland.

In 1948, Bak and his mother immigrated to Israel. In 1952, he studied art at the Bezalel Academy of Arts and Design in Jerusalem. After serving in the Israel Defense Forces, he continued his studies in Paris (from 1956 at the École nationale supérieure des Beaux-Arts) and spent various periods of time in Rome, Switzerland and Israel before settling permanently in the United States.

In 2001, Bak returned to Vilnius for the first time and has since visited his hometown several times.

Samuel Bak is a conceptual artist with elements of post-modernism as he employs different styles and visual vernaculars, i.e. surrealism (Salvador Dali, René Magritte), analytical cubism (Picasso), pop art (Andy Warhol, Roy Lichtenstein) and quotations from the old masters. The artist never paints direct scenes of mass death. Instead, he employs allegory, metaphor and certain artistic devices such as substitution: toys instead of the murdered children who played with them, books, instead of the people who read them. Further devices are quotations of iconographical prototyes, i.e. Michelangelo's "Creation of Adam" (1511/12) on the Sistine Ceiling or Albrecht Dürer's famous engraving entitled "Melencholia" (1516). He turns these prototypes into ironical statements. Irony in the art of Samuel Bak does not mean parody or derision, but rather disenchantment, and the attempt to achieve distance from pain. Recurring symbols are: the Warsaw Ghetto Child, Crematorium Chimneys or vast backgrounds of Renaissance landscape that symbolize the indifference of the outside world. These form a disturbing contrast with the broken and damaged images in the foreground. Samuel Bak's paintings cause discomfort, they are a warning against complacency, a bulwark against collective amnesia with reference to all acts of barbarism, worldwide and throughout the ages, through his personal experience of genocide.