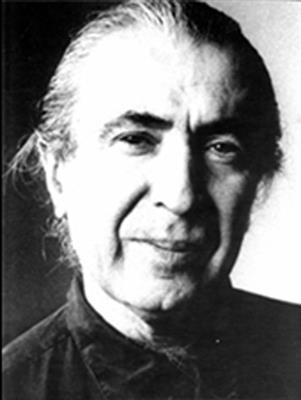 Charles Hossein Zenderoudi (born March 11, 1937, Tehran) is an Iranian painter and sculptor, known especially as a pioneer of Iranian modern art. He is a associated as a pioneer of the Saqqakhaneh school, a genre of neo-traditional modern art found in Iran that is rooted in a history of coffee-house paintings and Shiʿite Islam visual elements. His best known works are paintings from the 1960s and 1970s. He lives in Malakoff, France and works in Meaux, France.

Born in Tehran, Iran on March 11, 1937. He attended the Fine Art College of University of Tehran in the 1950s to study painting and calligraphy. After winning an award at the 2nd annual Tehran Painting Biennial in 1960, he moved in 1961 to Paris, France and later became a French national.

His painting titled, Tchaar Bagh was sold at Christie's international auction in Dubai for $1.6 million in 2008. There has been controversy around this artists legacy of work and his rights to certification of his artwork, including his family estate/foundation certifying (or denying certification) of his work retroactively.

This is a list of Hossein Zenderoudi's artwork in permanent museum collections.