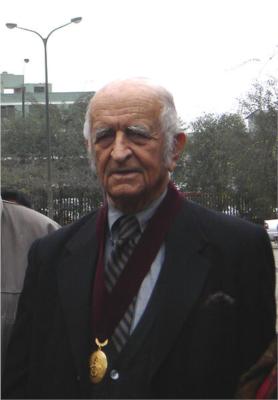 Fernando de Szyszlo Valdelomar (5 July 1925 – 9 October 2017) was a Peruvian painter, sculptor, printmaker, and teacher who was a key figure in advancing abstract art in Latin America since the mid-1950s, and one of the leading plastic artists in Peru.

Szyszlo was born in Lima, Peru; his mother was Peruvian of Spanish-Indian descent, and his father a geographer from Poland. In 1943, Szyszlo entered the architecture school of the National University of Engineering, but abandoned plans to follow that profession and enrolled in the School of Plastic Arts of the Pontifical Catholic University of Peru. After his graduation in 1948, he traveled to Europe where he studied the works of the masters, particularly Rembrandt, Titian and Tintoretto, and absorbed the varied influences of Cubism, Surrealism, Informalism, and abstraction. Szyszlo lived in Paris and Florence from 1948 to 1955, and then returned to Peru. While in Paris he met Octavio Paz and André Breton and was part of the group of expatriate Latin American artists and writers who met regularly at the Café de Flore, engaging in vigorous discussions on how they could participate in the international modern movement while preserving their Latin American cultural identity. Upon his return to Peru, Szyszlo became a major force for artistic renewal in his country breaking new ground by expressing a Peruvian subject matter in a non-representational style. In 1962, he became a professor of art at Cornell University. In 1965 he became a visiting lecturer at Yale University. Szyszlo was married to the Peruvian poet Blanca Varela (1926–2009), with whom he had two children. At the time of his death he resided and worked in Lima. He died on October 9, 2017, the same day as his wife by a domestic accident according to his secretary.

Lyricism of color enriched by rich textural effects and a masterly handling of light and shadow are hallmarks of Szyszlo's painting. Highly identified with the linking of ancient cultures to a modernist artistic language, Szyszlo's art reflects a broad culture that draws on many sources from philosophy and science to literature. His evocative allusions to rituals, myths, and the geography of sea and desert landscapes are often associated with pre-Columbian sacred sites. From the time of his first solo exhibit in Lima in 1947, Szyszlo had over 100 individual exhibitions in museums and galleries in Latin America, Europe and the United States and participated in the prestigious international biennials of São Paulo and Venice. His work is represented in important public and private collections throughout the world, including the Museum of Modern Art, New York; Solomon R. Guggenheim Museum, New York; Anita Shapolsky Gallery, New York; Museum of Fine Arts, Houston; Art Museum of the Americas, Washington, D.C.; Museo de Arte de Lima (Peru); Museu de Arte Moderna, São Paulo, Brazil; Museo Nacional de Arte, La Paz, Bolivia; Museo de Arte Contemporaneo Arequipa (Peru); and the Museum of Latin American Art, Long Beach, California, among others.