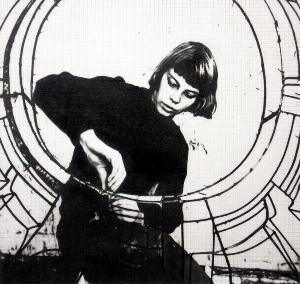 Lee Bontecou (born January 15, 1931 in Providence, Rhode Island) is an American sculptor and printmaker and a pioneer figure in the New York art world. She kept her work consistently in a recognizable style, and received broad recognition in the 1960s. Bontecou made abstract sculptures in the 1960s and 1970s and created vacuum-formed plastic fish, plants, and flower forms in the 1970s. Rich, organic shapes and powerful energy appear in her drawings, prints and sculptures. Her work has been shown and collected in many major museums in the United States and in Europe.

Bontecou attended Bradford Junior College (now Bradford College) in Haverhill, Massachusetts for her general education and then attended the Art Students League of New York from 1952 to 1955, where she studied with the sculptor William Zorach. She also spent the summer of 1954 at the Skowhegan School of Painting and Sculpture in Maine, where she learned to weld. She received a Fulbright scholarship from the U.S.-Italy Fulbright Commission to study in Rome in 1957-1958. In 1971, she began teaching at Brooklyn College.

Bontecou's work is deeply affected by WWII. Both her parents joined the war effort. Her mother wired transmitters for submarine navigation and her father sold gliders for the military. Growing up, she would spend summers with her grandmother in Yarmouth, Nova Scotia, where she developed a love of the natural world. She had an older brother, Hank.

Bontecou is best known for the sculptures she created in 1959 and the 1960s, which challenged artistic conventions of both materials and presentation by hanging on the wall. They consist of welded steel frames covered with recycled canvas and industrial materials (such as conveyor belts or mail sacks) and other found objects. Her best constructions are at once mechanistic and organic, abstract but evocative of the brutality of war. Art critic Arthur Danto describes them as "fierce", reminiscent of 17th-century scientist Robert Hooke's Micrographia, lying "at the intersection of magnified insects, battle masks, and armored chariots...”. She exhibited at Leo Castelli's art gallery in the 1960s, alongside Jasper Johns, Frank Stella and Robert Rauschenberg. One of the largest examples of her work is located in the lobby of the David H. Koch Theater at Lincoln Center for the Performing Arts in New York City, which was commissioned by the architect Philip Johnson. From the 1970s until 1991 she taught in the Art Department at Brooklyn College.

She continued to teach through the 1990s, while spending time in Pennsylvania. She moved to Orbisonia, Pennsylvania full-time in 1988 where she continues to work. There she maintained a vigorous studio practice, but showed infrequently. She was brought back to public attention by a 2003 retrospective co-organized by the Hammer Museum in Los Angeles and the Museum of Contemporary Art, Chicago, that traveled to the Museum of Modern Art in New York City in 2004. The retrospective included both work from her public, art-world career and an extensive display of work done after retreating from the public view. Bontecou's work was also included in the Carnegie International 2004-5 exhibit in Pittsburgh, Pennsylvania. In 2010, the Museum of Modern Art presented a retrospective of Bontecou's work entitled All Freedom in Every Sense. In 2014, her drawings were exhibited in Lee Bontecou: Drawn Worlds, organized by The Menil Collection, which traveled to the Princeton University Art Museum. Her work was also included in Revolution in the Making: Abstract Sculpture by Women, 1947-2016 at Hauser Wirth & Schimmel in 2016.