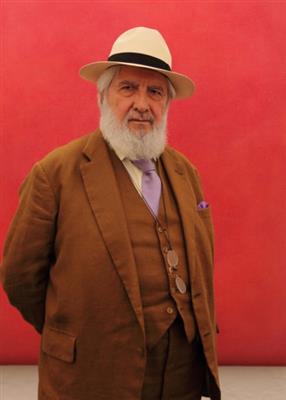 Graubner was born in 1930 in Erlbach (Saxony, Germany). From 1947 to 1948 he studied at the Academy of Arts, Berlin, and from 1948 to 1949 at the Academy of Arts, Dresden, where he was a student of Wilhelm Rudolph. When his professor had to leave the Dresden academy for ideological reasons, Graubner was on his side and therefore exmatriculated. In 1954 he left East Germany.

From 1954 to 1959, Graubner studied painting at the Kunstakademie Düsseldorf, where he was first a student of Otto Pankok with Günther Uecker and Bert Gerresheim becoming his classmates. Later he became a master pupil of Georg Meistermann. In 1959, when Meistermann left the Academy, Graubner became one of Karl Otto Götz's first students, his classmates being HA Schult, who also studied under Meistermann, and Kuno Gonschior. The importance of such classmates is emphasized by the compart article on Götz, which states that a "large number of later famous artists came out of Götz’ class at the Kunstakademie Düsseldorf (1959-1979): among them Kuno Gonschior, Gotthard Graubner, Sigmar Polke, Gerhard Richter, Manfred Kuttner, Rissa (later his wife), HA Schult."

In 1959, Graubner left the academy. Shortly before leaving it, he came into contact with Otto Piene and Heinz Mack, the founders of the Zero group, For some years, Graubner worked, with Mack, as an art teacher at the Lessing Gymnasium, Düsseldorf.

In 1965 he was appointed at the Academy of Fine Arts, Hamburg, where he became Professor of Painting in 1969. From 1976 to 1992 he hold a professorship at the Academy of Fine Arts, Düsseldorf. Among his many Düsseldorf students were Chen Ruo Bing, Mechthild Hagemann, Doris Helbling, Hans-Willi Notthoff, Georg Schmidt, Jens Stittgen, Stoya, Martin Streit, Peter Thol, Ulrich Moskopp, Albert Maria Pümpel, Ingo Ronkholz, Ansgar Skibba and Carl Emanuel Wolff

In 1988 the Federal President of Germany ordered two works from Graubner. The artist was also commissioned to create a cushion picture for the German Bundestag. In 1996 he became a member of the Saxon Academy of Arts, Dresden.

After his retirement, Graubner lived and worked in Düsseldorf-Oberkassel, where he had his studio. His last years he spent on the island of the Museum Insel Hombroich, Neuss, near Düsseldorf.

Graubner's art is characterised by his unique philosophy and the use of color in his work. He began developing his own style in 1959, while he studied under K.O. Götz. Before that, Graubner's work had been characterised by using color sparingly, in shapes and on the edges of the canvas, but, from 1955 onwards, he had already experimented with different approaches towards color, at first with watercolor and later on canvas. Instead of focusing on shapes, he began to use color lavishly.