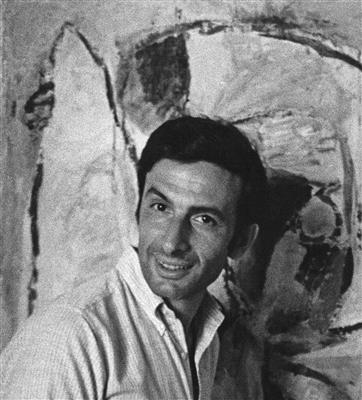 Albert Bitran (born 1931 in Istanbul, Turkey), is a French painter, engraver and sculptor.

Albert Bitran arrived in Paris in 1948. He was seventeen. He came from Istanbul -where he was born- to become an architect. But he soon decided to devote himself to painting.

1951, he is only twenty for the solo exhibition of his geometric works, galerie Arnaud in Saint Germain des Prés, and participates in many events of the "avant garde": the first "Abstract Art Exhibition" in Caracas, "Divergences" in the Théatre de Babylone …….

1954, his exhibition galerie Denise René with a preface by Henri-Pierre Roché marks the end of his "geometrical abstraction" period.

1955, in Saint Paul de Vence, he makes his first studies on landscape, a theme that will reappear in his works for the years to come under many different forms.

1956, "Naissance d'un Paysage" (Birth of a Landscape) large collage-painting that will be shown in "l'Envolée Lyrique" (The Lyrical Flight) at the Musée du Luxembourg in 2006. Now in the Geneva Museum, Jean-Claude Gandur's collection.

1957, completes ten stained-glass windows for the church in Schoeneck, North of France.

1958, (from), in his studio rue des Plantes, drawings, maroufles papers, oils, and new themes "l'Atelier", "Interieur-Extérieur" (Inside-Outside). At Mourlot, Bellini, Leblanc, etching and lithography. In the farm in Rigny-le-Ferron, ceramic sculptures and murals. In Paris, Jean Pollac, galerie Ariel, starts showing Bitran, as he will for the next fifty years.

1961, in Copenhagen, solo exhibition galerie Birch, first of many in Scandinavia. He exhibits also regularly in Holland (galerie Nova Spectra and Galerie Martin De Boer) and in Italy where he stays during long periods and works on gouache and lithography.

1965, in Albisola (Italy) he produces ceramics and meets up again with Wifredo Lam.

1967, in Cuba he takes part in the collective canvas completed for the May Show.

1968, Bitran moves to rue Notre-Dame-des-Champs in Montparnasse where he will live and work until 2000.

1970, creation of "les Doubles", analytic interrogation of his painting. "The doubles condense the terms of the enigma" wrote the philosopher Claude Lefort and Jean-Louis Baudry: "With the Doubles Bitran perfects his trap". Following themes: "Obliques", "Linears", "Laterals".

1973, "Sextuor", a sequence of six paintings in close cycle hanged according to a plan by architect Ricardo Porro is presented in museums and galeries in Norway, Denmark, Holland, Austria, France and is now in the collections of the Toulouse's Museum.

1979 and 1980, Bitran chairs the painting seminar of The Summer Academy in Salzburg and Manès Sperber writes a preface for his exhibition in the Traklhauss.

1981, in his house in the South of France (Lot) experiments of new techniques on paper, cardboard and canvas.

1982, (from), research of "les Grandes Formes" (the Large Forms) that Patrick Bongers will choose for his first show at Galerie Louis Carré, exhibited after galerie Boisserée in Köln, Art Point in Tokio , Birch in Copenhagen, Louis Stern in Los Angeles …….