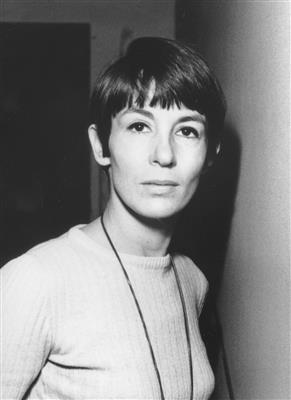 After graduating from Pomona College in 1951, marrying Herbert Hafif, doing graduate work in Italian Renaissance and Far Eastern Art, she planned a year-long trip to Florence in 1961. Hafif settled; however, in Rome, where she remained for almost eight years, painting and exhibiting work she has called “Pop-Minimal” in retrospect. Returning to California in 1969, and leaving painting for a time to experiment with film, photography and sound installation, she completed an MFA degree at the University of California at Irvine.

In 1971, Hafif moved to New York City to search out a return to painting at a time when the validity of painting was in doubt; not finding a satisfactory path, she woke on the morning of January 1, 1972, to make her first Pencil on Paper drawing, using short vertical marks covering from top to bottom a 24 x 18 inch sheet of drawing paper. This method was used in the development of her one-color or “color study” paintings. In An Extended Gray Scale, 1972–73, a work that occupied her for nearly a year, she used standard cotton canvases to represent Painting: 106 pieces, each 22 x 22 inches, and each painted in a different gradation (as many as she could distinguish) from black to white.

Exhibiting for more than eight years with Sonnabend Gallery in Soho and Paris, she developed series of paintings that would become the basis of what came to be called The Inventory: 1974, Mass Tone Paintings; 1975, Wall Paintings;1976, Pencil Drawings; 1978, Neutral Mix Paintings; 1979, Broken Color Paintings at The Clocktower with Alanna Heiss; 1981, Black Paintings. During this time she also published articles on painting in Artforum: “Beginning Again” in 1978, and in Art in America: “Getting on With Painting,” 1981, and “True Colors,” in 1989.

In the 1980s and 1990s she developed new series, along with relationships with galleries in Europe, first in Munich, then Düsseldorf, and eventually Vienna, London, Paris, and elsewhere. Living part-time in California after 1999 still other series of paintings have appeared, most recently the Shade Paintings.

Hafif's work is held in collections worldwide including The Museum of Modern Art, New York.