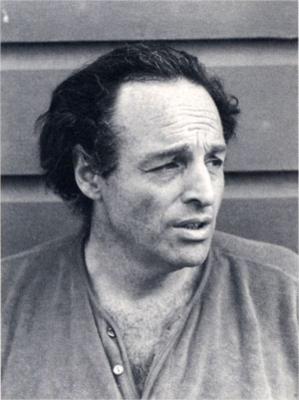 Al Held (October 12, 1928 – July 27, 2005) was an American Abstract expressionist painter. He was particularly well known for his large scale Hard-edge paintings. As an artist, multiple stylistic changes occurred throughout his career, however, none of these occurred at the same time as any popular emerging style or acted against a particular art form. In the 1950s his style reflected the abstract expressionist tone and then transitioned to a geometric style in the 60s. During the 1980s there was a shift into acrylic painting that emphasized bright geometric space that’s deepness reflected infinity. From 1962 to 1980 he was a professor of art at Yale University.

Born in Brooklyn, New York in 1928, he grew up in the East Bronx, the son of a poor Jewish family thrown onto welfare during the depression. Held showed no interest in art until leaving the Navy in 1947. Inspired by his friend Nicholas Krushenick, Held enrolled in the Art Students League of New York. He originally thought about studying in Mexico under the prominent muralist David Siqueiros, who created gigantic pieces that contained intense political material. However, the G.I. accreditation that he planned on using to help with his travels was not accepted at the school he planned on attending. In 1949, using the support of the G.I. Bill, he went to Paris for three years, to study at the Académie de la Grande Chaumière. In Paris, he decided that realism was not for him and moved into abstraction. During the early 50s Avant-garde painters in the United States were receiving fresh inspiration from abstract expressionists such as Jackson Pollock, Mark Rothko, and Willem De Kooning. Together these artists brought a new way of thinking that influenced Held. He returned to New York in 1953 and married Giselle Wexler, with whom he had a daughter, Mara. After the break-up with his wife, he went to San Francisco where he met the soon-to-be postmodern dancer and choreographer Yvonne Rainer. They moved together to New York in 1956, got married in 1957 to split up in 1959. Then in 1969, he married the sculptor, Sylvia Stone.

The Galerie Huit in Paris was where his first exhibition was set up in 1952. However, the art scene in New York was starting to gain new popularity and Held moved back there. During one of his solo Abstract expressionist exhibitions in 1959, Held's large-scale paintings of colourful, simple abstract geometric forms gained increasing recognition in America and Europe. In 1962, he was appointed to the Yale University Faculty Of Art (where he would teach until 1980). In 1965, the critic Irving Sandler curated the critically acclaimed Concrete Expressionism show at New York University featuring the work of painters Al Held and Knox Martin and the sculptors Ronald Bladen, George Sugarman and David Weinrib.

In 1966, Held was awarded a Guggenheim Fellowship and received the Logan Medal of the arts. Feeling that he'd reached the end of his style's potential, he shifted in 1967 to black and white images that dealt with challenging perspectives and "spatial conundrums". Some critics dismissed this work as simply disorienting; others declared it Held's finest achievement to date. By the late 1970s, he had re-introduced colour to his work. In 1988 he was elected into the National Academy of Design as an Associate member, and became a full Academician in 1994.