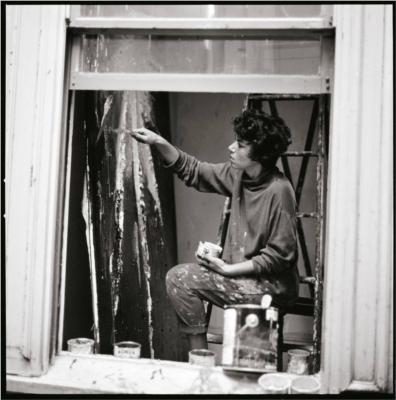 DeFeo works on The Jewel at her Fillmore Street apartment in 1959. Photo: The Whitney Museum of American Art

An only child, Mary Joan DeFeo was born to a nurse from an Austrian immigrant family and an Italian-American medical student in Hanover, New Hampshire in 1929.

In 1932, the family moved to the San Francisco Bay Area, and her father enrolled in Stanford University School of Medicine. Her parents’ marriage was troubled, and DeFeo was frequently separated from them throughout her early childhood. DeFeo spent a year in institutional care when she was four and was periodically sent to live with her maternal grandparents in rural Colorado. DeFeo moved with her mother to San Jose, California after her parents divorced in 1939.

DeFeo became known as "Jay" in high school, where she found a mentor in her art teacher. She was also mentored by her neighbor, a commercial artist named Michelangelo. In 1946, she enrolled at the University of California, Berkeley. There, she explored the art scene in San Francisco and embraced abstract expressionism. Thanks to Margaret Peterson O'Hagan, DeFeo was exposed to North American native art in her Berkeley studies. She earned her BA in 1950 and her MA in 1951. DeFeo attended UC Berkeley at the same time as Sam Francis and Fred Martin, two California painters whom she remained close to long after graduating.

She resisted what she called "the hierarchy of material," using plaster and mixing media to experiment with effects, a thread one can see running through the art of that time, especially on the West Coast.

In 1951, a fellowship provided her the opportunity to travel widely in Europe where she worked feverishly. During a three-month period in Florence, she completed over two hundred paintings. She studied African and prehistoric art in Paris and London libraries. After her brief time working in Paris and London, she traveled in Europe and North Africa, and for 6 months worked in Florence, where she started to find her own kind of imagery.

Upon returning to Berkeley, she rented an apartment and took odd jobs. She continued her exploration with image and materials. In 1953, she was fired from her job teaching art to children at the California College of the Arts and Crafts after being convicted for shoplifting two cans of paint. In the mid-1950s, she supported herself by making and selling jewelry. It was during this period, she met Wally Hedrick, a student at the California College of Arts and Crafts and a proponent of what was described as “personalized Dada." They married in 1954 and shared a building on Fillmore Street which was a hang out for other artists, writers and jazz musicians. The artist Billy Al Bengston remembers DeFeo as having “style, moxie, natural beauty and more ‘balls’ than anyone.”

Hedrick, Deborah Remington, Hayward King, David Simpson, John Allen Ryan and Jack Spicer founded the Six Gallery at 3119 Fillmore St in San Francisco, on the location of the King Ubu Gallery, which had been run by Jess and Robert Duncan. Joan Brown, Manuel Neri, and Bruce Conner would become associates of the Six Gallery. DeFeo was present when Allen Ginsberg first read his poem Howl at the famous Six Gallery reading in 1955. In 1959, DeFeo became an original member of Bruce Conner's Rat Bastard Protective Association