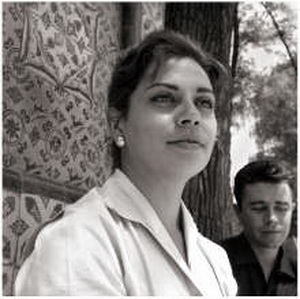 Lilia Carrillo (1930–1974) was a Mexican painter from the Generación de la Ruptura, which broke with the Mexican School of Painting of the early 20th century. She was trained in the traditional style but her work began to evolve away from it after studying in Paris in the 1950s. While she and husband abstract artist Manuel Felguérez struggled to get their work accepted, even selling Mexican handcrafts and folk art to survive, she eventually had her canvas work exhibited large venues in Mexico City and various cities in the world. Her work was part of the inaugural exhibition of the Museo de Arte Moderno in Mexico City in 1964. After her death in 1974, her work received honors from the Palacio de Bellas Artes and has been exhibited in various venues.

Lilia Carrillo was born on November 2, 1930 to General Francisco Carrillo, a pilot, and Socorro García, their only child. The father abandoned the family when Lilia was young and her mother raised her alone.

When she was little, Carrillo wanted to be an astronomer. During her childhood, she was surrounded by intellectuals, poets and artists that visited her home in Colonia Roma in Mexico City. Her mother was good friends with María Asúnsolo and was well acquainted with people such as Diego Rivera, David Alfaro Siqueiros, Carlos Pellicer and Juan Soriano . When she was a teenager, she decided to be a painter and her mother hired her friend Manuel Rodríguez Lozano. Soon after, Rodríguez Lozano helped her to enter the Escuela Nacional de Pintura, Escultura y Grabado "La Esmeralda" in 1947, where she graduated with honors in 1951. Her studied under Rodríguez Lozano and La Esmeralda (with painters such as Agustín Lazo, Carlos Orozco Romero and Antonio M. Ruíz) were very academic and based on the then dominant Mexican School of Painting. While in school, she participated in a mural at the former Monastery of San Diego. During this time, she fell from the scaffolding, injuring her back. Although she recovered, it is possible that this was the source of her future ailment.

Encouraged by Juan Soriano to explore other kinds of painting, in 1953, she received a scholarship to study in Paris, moving their with her new husband Ricardo Guerra. She enrolled in the Académie de la Grande Chaumière, learning about avant-garde movements such as Cubism, Surrealism, Expressionism and various forms of abstract art. However, she guarded about these movements at first.

She returned to Mexico in 1956 after separating from Guerra. In 1960, she married Mexican abstract artist Manuel Felguérez in Washington, DC. Both were of the new Generación de la Ruptura artist movement, which had trouble selling paintings in established venues. Carrillo and Felguérez turned to Mexican handcrafts and folk art to make money to survive. Carrillo had two children to support as well, prompting her to take on a Czechoslovakian persona of “Felisa Gross” to produce purely for commercial purposes. In 1962, she traveled to Peru with Felguérez to exhibit her work at the Instituto de Arte Contemporáneo. On this occasion, she met Peruvian vanguard artists such as Fernando de Szyszlo.