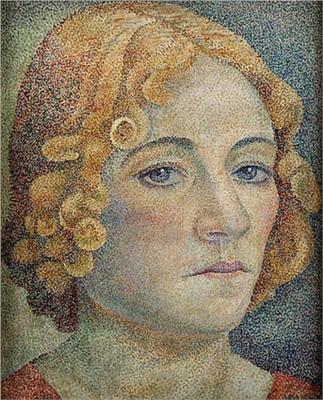 Marie Bronislava Vorobyeva-Stebelska (Russian: Мария Брониславовна Воробьёва-Стебельская; 1892 – 4 May 1984), also known as Marevna, was a 20th-century, Russian-born painter known for her work with Cubism and pointillism.

She is internationally known for convincingly combining elements of cubism (called by her "Dimensionalism") with pointillism and – through the use of the Golden Ratio for laying out paintings – structure. She has been accredited with being the first female cubist painter. Though she lived the greater part of her life abroad – her formative years as a cubist painter in France and her mature years in England – she is often referred to as a "Russian painter".

From her relationship with the Mexican cubist painter and later muralist Diego Rivera in Paris she had a daughter, Marika Rivera (1919-2010), who became a professional dancer and film actress.

Reputedly, the nickname Marevna was given to her by Maxim Gorky after a Russian fairy sea princess.

Marevna reputedly was born in 1892 in Cheboksary in the administrative district of Kazan in Russia as Maria Bronislavovna Vorobyova-Stebelskaya to the Polish nobleman Bronisław Stebelski and the actress Maria Vorobyova. She spent a lonely childhood in Tiflis, now Tbilisi, the capital of Georgia, then under Russian control. In 1910 she went to Moscow to study at the Stroganov Art Academy, but in the following year left for Italy. On the island of Capri she was introduced to Maxim Gorki who named her after a Russian fairy sea princess, Marevna, a name she adopted and made her own. A petite blue-eyed blonde, she was said not to have been a conventional beauty; but an outgoing nature paired with the proverbial depth of the Russian soul seems to have given her a special charm that easily elicited an enthusiastic echo from her contemporaries.

In 1912, as a twenty-year-old budding talent, Marevna moved to Paris, where she continued her art studies and soon began displaying her work at exhibitions. She became acquainted and, indeed, friends with some of the greatest artists and writers of the early twentieth century then resident in Montparnasse and especially at La Ruche. Among them were Georges Braque, Marc Chagall, Jean Cocteau, Ilya Ehrenburg, Maxim Gorki, Max Jacob, Moise Kisling, Pinchus Krémègne, Fernand Léger, Henri Matisse, Amedeo Modigliani, Pablo Picasso, and Chaim Soutine.

Three years later, in 1915, the gifted Mexican painter Diego Rivera, also temporarily resident in Paris at La Ruche – no Adonis but a known womanizer of violent temper – began a relationship with her while he was still in a common-law marriage with the Russian artist Angelina Beloff, six years his senior and then pregnant with his only son Diego Jr., who was not, however, to survive for more than 14 months.