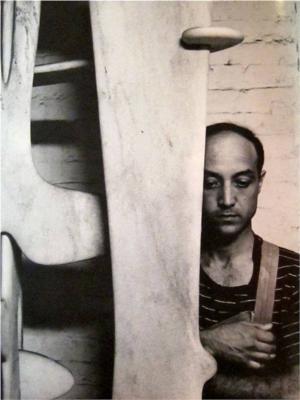 In 1947, Noguchi began a collaboration with the Herman Miller company, when he joined with George Nelson, Paul László and Charles Eames to produce a catalog containing what is often considered to be the most influential body of modern furniture ever produced, including the iconic Noguchi table which remains in production today. His work lives on around the world and at the Noguchi Museum in New York City.

Isamu Noguchi was born in Los Angeles, the illegitimate son of Yone Noguchi, a Japanese poet who was acclaimed in the United States, and Léonie Gilmour, an American writer who edited much of Noguchi's work.

Yone had ended his relationship with Gilmour earlier that year and planned to marry The Washington Post reporter Ethel Armes. After proposing to Armes, Yone left for Japan in late August, settling in Tokyo and awaiting her arrival; their engagement fell through months later when she learned of Léonie and her newborn son.

In 1906, Yone invited Léonie to come to Tokyo with their son. She at first refused, but growing anti-Japanese sentiment following the Russo-Japanese War eventually convinced her to take up Yone's offer. The two departed from San Francisco in March 1907, arriving in Yokohama to meet Yone. Upon arrival, their son was finally given the name Isamu (勇, "courage"). However, Yone had married a Japanese woman by the time they arrived, and was mostly absent from his son's childhood. After again separating from Yone, Léonie and Isamu moved several times throughout Japan.

In 1912, while the two were living in Chigasaki, Isamu's half-sister, pioneer of the American Modern Dance movement Ailes Gilmour, was born to Léonie and an unknown father. Here, Léonie had a house built for the three of them, a project that she had the 8-year-old Isamu "oversee". Nurturing her son's artistic ability, she put him in charge of their garden and apprenticed him to a local carpenter. However, they moved once again in December 1917 to an English-speaking community in Yokohama.

In 1918, Noguchi was sent back to the U.S. for schooling in Rolling Prairie, Indiana. After graduation, he left with Dr. Edward Rumely to LaPorte, where he found boarding with a Swedenborgian pastor, Samuel Mack. Noguchi began attending La Porte High School, graduating in 1922. During this period of his life, he was known by the name "Sam Gilmour".

After high school, Noguchi explained his desire to become an artist to Rumely; though he preferred that Noguchi become a doctor, he acknowledged Noguchi's request and sent him to Connecticut to work as an apprentice to his friend Gutzon Borglum. Best known as the creator of Mount Rushmore National Memorial, Borglum was at the time working on the group called Wars of America for the city of Newark, New Jersey, a piece that includes forty-two figures and two equestrian sculptures. As one of Borglum's apprentices, Noguchi received little training as a sculptor; his tasks included arranging the horses and modeling for the monument as General Sherman. He did, however, pick up some skills in casting from Borglum's Italian assistants, later fashioning a bust of Abraham Lincoln. At summer's end, Borglum told Noguchi that he would never become a sculptor, prompting him to reconsider Rumely's prior suggestion.