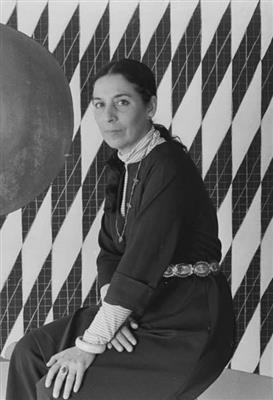 Luchita Hurtado ([luˈt͡ʃita urˈt̪aðo]; November 28, 1920 – August 13, 2020), born Luisa Amelia García Rodriguez Hurtado, was a Venezuelan-born American painter based in Santa Monica, California, and Arroyo Seco, New Mexico. Born in Venezuela, she moved to the United States as a child. Although she became involved with art after concentrating on the subject in high school and created art over eight decades, she only received broad recognition for her art towards the end of her life. Her work has strong environmental themes and bridges many genres, bearing influence from different art movements and cultures.


Hurtado was named as one of Time magazine's 100 Most Influential People of 2019.


Hurtado was born in Maiquetía, Venezuela, on November 28, 1920. Her mother moved from Venezuela to New York with her two sisters and worked as a seamstress. Hurtado and her older sister joined their mother and aunts in New York shortly afterwards in 1928, while their father stayed in Venezuela. She studied fine art at Washington Irving High School, took classes at the Art Students League, and volunteered at La Prensa, a Spanish-language newspaper where she met her first husband, Chilean journalist Daniel de Solar. The couple married when Luchita was 18, and went on to have two children together.  At the invitation of Rafael Trujillo, then-dictator of the Dominican Republic, Hurtado and de Solar moved to Santo Domingo to start a newspaper. [2] The couple moved back to New York, where they became close with a group of Latin American artists and journalists, such as Rufino Tamayo. Hurtado and Tamayo became close friends, and would experiment with color-mixing together.


She and de Solar divorced in 1942. She subsequently married Wolfgang Paalen, an artist and collector, after being introduced to him by Isamu Noguchi. The couple travelled together to Mexico to research pre-Colombian art, and Hurtado took photographs that were later published. Hurtado’s son from her first marriage, Pablo, died of polio at age 5. She wanted to have another child, while Paalen did not, so the couple divorced.


In 1945, she made the painting that is recognized as the first in her career, and began freelance work as an illustrator for Condé Nast and as a muralist for Lord & Taylor in New York. During this time, her circle of fellow artists expanded. One such connection she made was with Ailes Gilmour, who had roomed with Hurtado and de Solar when they were still married. Gilmour was the half-sister of Isamu Noguchi, so Noguchi and Hurtado became close, often visiting galleries together.


In 1944, Hurtado made window displays and painted murals for Bloomingdale’s. She also worked as a freelance illustrator for Conde Nast, creating sketches for magazine spreads. On a 1946 trip to San Lorenzo, Mexico with her soon-to-be second husband, Wolfgaang Palen, she took photographs of Olmec heads that were published in 1952 in Cahiers D'Art to accompany an article, “La Plus Aincien Visage du Nouveau Monde”.


In 1972, Hurtado participated in a feminist-focused group exhibition, “Invisible/Visible,” at the Long Beach Museum of Art, which was organized by Judy Chicago and Dextra Frankel. In 1974, she had a solo exhibition at the Woman’s Building in Los Angeles. Though Hurtado participated in a Feminist consciousness-raising group, when asked to join a West Coast chapter of the Guerilla Girls, she declined.