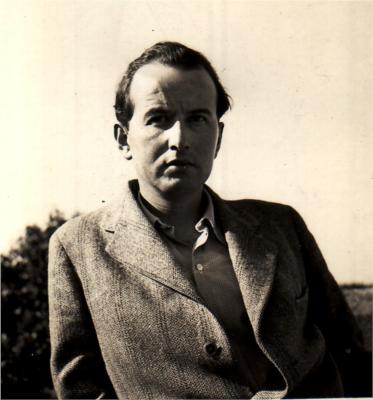 Wolfgang Paalen was an Austrian-Mexican painter and theorist. He was born in Vienna in 1905, as the first of four sons of the Austrian-Jewish merchant and inventor Gustav Robert Paalen, and his German wife, the actress Clothilde Emilie Gunkel. The first years of his life he spent between Vienna and Styria where his father had a fashionable health resort. 1912 the family moved to Berlin and to the Silesian city of Żagań, where his father had bought a castle, the St. Rochusburg. Wolfgang Paalen went to different schools in Sagan, before his parents engaged a private teacher.

In 1919, the family moved to Rome, where the Paalens received many guests, such as Leo von König who became Wolfgang's first teacher. In 1924, he went back to Berlin where he applied for the Academy without success. In 1925, he exhibited in the Berliner Sezession and went through a further formation in aesthetics, deeply influenced by Julius Meier-Graefe, Nietzsche, Schopenhauer and the Gestalt theory of Max Wertheimer. After another year of studies in Paris and Cassis (1925/26) where he met Jean (Janco) Varda and Georges Braque, he visited the art school of Hans Hofmann in Munich and Saint Tropez until 1928.

After 1928, he stayed again in Cassis and Paris, studied shortly with Fernand Léger and became a member of the group Abstraction-Creation in 1933 and the Parisian Surrealists around André Breton in 1936, participating in all its major exhibitions and outreach thereafter, until he travelled to New York in May 1939. The same year he traveled through British Columbia with his wife, the French painter Alice Rahon and his friend Eva Sulzer. In autumn 1939 he followed an invitation of Frida Kahlo and settled in Mexico, where together with the Peruvian poet César Moro he curated the International Surrealist Exhibition in the Galería de Arte Mexicano. During the war years Paalen retreated more and more to his studio in San Angel, newly built by the German architect Max Cetto.

Due to his magazine, his presence and exhibitions in New York City, 1940 Julien Levy, 1945 Peggy Guggenheim Art of this Century and 1946 Galerie Nierendorf, he influenced significantly the genesis of Abstract Expressionism. 1949 he worked in San Francisco with Gordon Onslow Ford and Lee Mullican in the Dynaton group, before he went to Paris in 1952 and back again to Mexico in 1954. He committed suicide in 1959 in Taxco, Mexico.

In the course of his association with the Surrealists and their attempts to transform automatic writing into drawing and painting, he created fumage – a technique for generating evocative patterns with the smoke and soot of a lit candle. Between 1936 and 1937 Paalen developed with these visionary-ephemeral forms on canvas, which he then mostly painted over in oil, a number of mature paintings which soon made his international reputation. Together with Marcel Duchamp, Man Ray and Salvador Dalí he was among the responsibles for the design of the International Exhibition of Surrealism in the Palais des Beaux Arts in Paris 1938, where he installed one of the first environments beneath Duchamps ceiling of empty sacks of coal. It was particularly in the forties and fifties that Paalen's art played a major role in changing the conception of abstract art.

Wolfgang Robert Paalen (July 22, 1905 in Vienna, Austria – September 24, 1959 in Taxco, Mexico) was a German-Austrian-Mexican painter, sculptor and art philosopher. A member of the Abstraction-Création group from 1934–35, he joined the influential Surrealist movement in 1935 and was one of its prominent exponents until 1942. Whilst in exile in Mexico, he founded his own counter-surrealist art-magazine DYN, in which he summarized his critical attitude towards radical subjectivism and Freudo-Marxism in Surrealism with his philosophy of contingency. He rejoined the group between 1951 and 1954, during his sojourn in Paris.

Wolfgang Paalen was born in one of the famous Wienzeilenhäuser designed by Otto Wagner in Vienna (Köstlergasse 1 / Linke Wienzeile No. 40), Austria. He was the first of four sons of the Austrian-Jewish merchant and inventor Gustav Robert Paalen (de), and his German wife, the actress Clothilde Emilie Gunkel. Gustav Robert, who had Polish-Ashkenazi and Spanish-Sephardic origins, converted to Protestantism in 1900 and changed his name from Pollak to Paalen in the same year. His considerable wealth was based on modernist inventions and patents such as the vacuum cleaner, the vacuum flask, known under the name Thermos bottle, and the first flow-type heater (for Junkers), amongst others. In a relatively short period Gustav R. Paalen managed to ascend into the distinguished Viennese upper-class of the Austro-Hungarian Empire. He became also a well known collector of Old Master paintings with masterpieces, like Francisco Goya´s Señora Sabasa Garcia, which he had acquired from the Berlin patron Henri James Simon and is today one of the highlights of the National Gallery, Washington. As a friend of Wilhelm von Bode and member of the Freundeskreis des Kaiser-Friedrich Museums, Berlin, he also financed the acquisition of the famous Titian painting Venus with the Organ-Player.

The first years of his life Wolfgang Paalen spent between Vienna and Styria where his father had opened the fashionable health resort Tobelbad, in the presence of Franz-Joseph I of Austria, to whom he dedicated a memorial still visible today. In Tobelbad Paalen senior received such prominent guests as Gustav Mahler, poet and artist Fritz von Herzmanovsky-Orlando, Julius Meier-Graefe, Ida Zweig (the mother of Stefan Zweig), among others. Some sources claim that it was Paalen who introduced Alma Mahler, during her visit in Tobelbad in 1910, to the German architect Walter Gropius, whom she married later. 1912 the Paalen family moved to Berlin and to the Silesian city of Sagan (today Żagań), where his father had bought and rebuilt the castle of St. Rochusburg. During World War I Gustav Robert served both empires, the Austrian and the German, with the organization of food supply and worked closely together with Walther Rathenau and Albert Ballin´s Zentral-Einkaufsgesellschaft. Wolfgang attended different schools in Sagan, and during the war his parents also engaged a private tutor. The teacher was also an organist who specialized in Johann Sebastian Bach, who thus became Wolfgang's favourite composer.

In 1919 the family moved to Rome, where they kept a luxurious household in the Villa Caetani on the Gianicolo and received many guests, such as the German painter Leo von König (1871–1944) who became Wolfgang's first art teacher. It was in Rome, under the guidance of his father´s friend, the archeologist Ludwig Pollak, that he became an expert in Greek and Roman archaeology. In 1923 he returned to Berlin alone to apply for the Academy. Although unsuccessful, he met his lifelong friend, companion and patron, the Swiss violinist and photographer Eva Sulzer (Winterthur 1902 – 1990 Mexico City). In 1925 he exhibited at the Berlin Secession and studied further in aesthetics, deeply influenced by Julius Meier-Graefe, Nietzsche, Schopenhauer and the Gestalt theory of Max Wertheimer. It is here and with hypnopompic hallucinations in the castle in Sagan that he found the base for his later ideas of a deep entanglement of vision and outer world. After another year of studies, in Paris and Cassis (1925–26), where he met Roland Penrose, Jean Varda (Janco) and Georges Braque, he visited the art school of Hans Hofmann in Munich and, in 1928, Saint-Tropez. He then decided to settle in Paris. The year 1928 marks also the beginning of the decline of the family´s splendour, once founded on the patriarchal rules of the Austro-Hungarian monarchy. After a homoerotic affair with a mental healer, his younger brother Hans-Peter died unexpectedly in a Berlin insane asylum, presumably of suicide; the parents consequently separated; their mother´s bipolar disposition intensified as a result; the fortune of Gustav Paalen is quashed after the Black Tuesday, 1929. A later tragedy, crucial to Paalen's development, was his beloved brother Rainer's shooting himself in head with a pistol. Wolfgang witnessed the event, although Rainer survived, following treatment in a Berlin hospital and escaped from the city in 1933. He died in a mental hospital in Czechoslovakia in 1942.