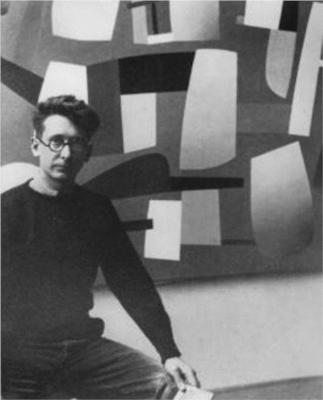 Jean Hélion (April 21, 1904 – October 27, 1987) was a French painter whose abstract work of the 1930s established him as a leading modernist. His midcareer rejection of abstraction was followed by nearly five decades as a figurative painter. He was also the author of several books and an extensive body of critical writing.

He was born at Couterne, Orne, the son of a taxi driver and a dressmaker. After spending his first eight years with his grandmother, he rejoined his parents in Amiens, where he went to school. Although he experimented with painting pictures on cardboard as a schoolboy, his greater love was poetry. Interested in chemistry as well, Hélion began working as an assistant to a pharmacist in 1918, and set up a laboratory in his bedroom. He later wrote, "...I dreamed and was attracted by shapes and colors which proceeded from the reality of things and were their very essence. My passion for inorganic chemistry arose from my fondness for these shapes, these crystals, these colours, this analysis of a revealed truth." In 1920 he enrolled in the study of chemistry at l'Institut Industriel du Nord in Lille (École centrale de Lille), but left for Paris in 1921 without finishing the course.

In Paris he wrote poetry and worked as an architectural apprentice. He experienced what he called the great turning point of his life while on a research project at the Louvre, where he discovered the works of Nicolas Poussin and Philippe de Champaigne, and decided to become a painter. His first paintings date from 1922–23. In 1925 he abandoned his architectural studies and began attending figure drawing classes at the Académie Adler.

Hélion's early works are similar to manner to Soutine. He met Otto Freundlich in 1925 and later described him as the first abstract painter he had ever met, saying, "At that time I had no idea there was such a thing as abstract art." The next year he was introduced to cubism by the Uruguayan painter Joaquín Torres-García, and in 1928 he exhibited for the first time, showing two paintings at the Salon des Indépendants. His work of this period, mostly still lifes, is close in style to that of Torres-García, with simplified color and bold outlines. In 1930, he joined the group Art Concret and adopted a vocabulary of abstract rectilinear form that derived from the Neoplasticists Piet Mondrian and Theo van Doesburg. During the following years Hélion's art evolved to include curved lines and volumetric forms. He became recognized as a leading abstract painter, as well as an eloquent critic and theoretician whose writings were frequently published in Cahiers d'Art and elsewhere during the 1930s.

Hélion moved to the United States in July 1936, staying in New York and later Virginia. While he continued painting abstractly, he increasingly felt that his work was tending toward representation, and he began drawing from life. His reading of Baudelaire directed him toward a concept of modernity in which the most ephemeral aspects of contemporary life are reconciled with the timeless and the geometric. He believed that Seurat, who he called "the last great master, and Léger, the greatest after him", especially exemplified this Baudelairian modernism. Hélion's work underwent a radical change—one that would confound his admirers—when he abandoned abstraction decisively in 1939. His first large-scale figurative canvas, With Cyclist (Au cycliste), revealed a simplified and streamlined treatment of form that is related to Léger's style of the 1930s.