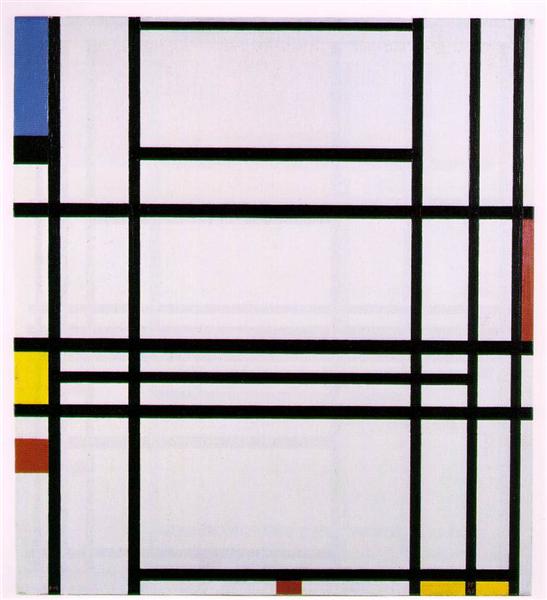 De Stijl (/də ˈstaɪl/; Dutch pronunciation: [də ˈstɛil]), Dutch for "The Style", also known as neoplasticism, was a Dutch artistic movement founded in 1917 in Leiden. The De Stijl consisted of artists and architects. In a narrower sense, the term De Stijl is used to refer to a body of work from 1917 to 1931 founded in the Netherlands. Proponents of De Stijl advocated pure abstraction and universality by a reduction to the essentials of form and colour; they simplified visual compositions to vertical and horizontal, using only black, white and primary colors.

Mondrian sets forth the delimitations of neoplasticism in his essay "Neo-Plasticism in Pictorial Art". He writes, "this new plastic idea will ignore the particulars of appearance, that is to say, natural form and colour. On the contrary, it should find its expression in the abstraction of form and colour, that is to say, in the straight line and the clearly defined primary colour". With these constraints, his art allows only primary colours and non-colours, only squares and rectangles, only straight and horizontal or vertical lines. The De Stijl movement posited the fundamental principle of the geometry of the straight line, the square, and the rectangle, combined with a strong asymmetricality; the predominant use of pure primary colors with black and white; and the relationship between positive and negative elements in an arrangement of non-objective forms and lines".

The name De Stijl is supposedly derived from Gottfried Semper's Der Stil in den technischen und tektonischen Künsten oder Praktische Ästhetik (1861–3), which Curl suggests was mistakenly believed to advocate materialism and functionalism. The "plastic vision" of De Stijl artists, also called Neo-Plasticism, saw itself as reaching beyond the changing appearance of natural things to bring an audience into intimate contact with an immutable core of reality, a reality that was not so much a visible fact as an underlying spiritual vision. In general, De Stijl proposed ultimate simplicity and abstraction, both in architecture and painting, by using only straight horizontal and vertical lines and rectangular forms. Furthermore, their formal vocabulary was limited to the primary colours, red, yellow, and blue, and the three primary values, black, white, and grey. The works avoided symmetry and attained aesthetic balance by the use of opposition. This element of the movement embodies the second meaning of stijl: "a post, jamb or support"; this is best exemplified by the construction of crossing joints, most commonly seen in carpentry.

In many of the group's three-dimensional works, vertical and horizontal lines are positioned in layers or planes that do not intersect, thereby allowing each element to exist independently and unobstructed by other elements. This feature can be found in the Rietveld Schröder House and the Red and Blue Chair.