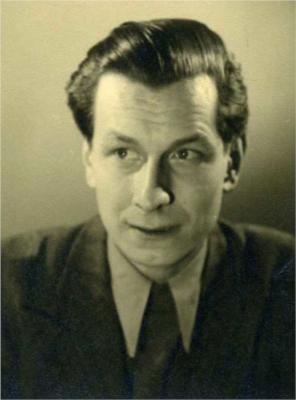 Mathias Goeritz (complete name according to Spanish-speaking manner: Werner Mathias Goeritz Brunner) (April 4, 1915 in Danzig (Gdańsk), Germany (now in Poland)) - August 4, 1990 in Mexico City) was a well-known Mexican painter and sculptor of German origin. After spending much of the 1940s in North Africa and Spain, Goeritz and his wife, photographer Marianne Gast, immigrated to Mexico in 1949.

Mathias Goeritz spent his childhood in Berlin. He began studying philosophy and the history of art at Berlin's Friedrich-Wilhelm-Universität, now known as the Humboldt University of Berlin, in 1934. Goeritz received a doctorate in art history from this institution in 1940. His doctoral dissertation on the nineteenth-century German painter Ferdinand von Rayski was published as Ferdinand Von Rayski und die Kunst des Neunzehnten Jahrhunderts. During the course of his studies, Goeritz also trained as an artist at the Kunstgewerbe- und Handwerkerschule in Berlin-Charlottenberg (Applied arts and tradesmen's school), where he studied drawing with German artists Max Kaus and Hans Orlowski. Upon completion of his doctorate, Goeritz worked at Berlin’s Nationalgalerie (National Gallery), now the Alte Nationalgalerie, under the supervision of nineteenth-century art specialist Paul Ortwin Rave. In early 1941, in the midst of the Second World War, Goeritz left Germany, settling first in Tetuan, Morocco. He and photographer Marianne Gast married in 1942, and the couple settled in Granada, Spain just after the war ended in 1945.

Goeritz's career as a professional artist began with his first solo exhibition at the Librería-Galería Clan in Madrid in June 1946 under the pseudonym "Ma-Gó". The Goeritzs relocated to Madrid in 1947. There, Goeritz developed a close friendship with Spanish sculptor Ángel Ferrant.

In the summer of 1948, Goeritz and Ferrant traveled to visit the prehistoric paintings of the Cave of Altamira in the north of Spain, along with writer Ricardo Gullón and others. It was then that Goeritz proposed the founding of an Escuela de Altamira (Altamira School), an association of artists and writers who would meet annually near the Cave, in 1948. The Escuela de Altamira would ultimately hold two meetings, in 1949 and 1950.

Through the intervention of Mexican architect Ignacio Díaz Morales, Goeritz was offered a job teaching art history to the students of the newly founded Escuela de Arquitectura in Guadalajara, Mexico in 1949. In 1953 he first presented his "Manifiesto de la Arquitectura Emocional" (Emotional Architecture Manifesto) at the pre-inauguration of the Museo Experimental El Eco in Mexico City, which he designed in 1952-53. Goeritz also collaborated with Luis Barragán to make monumental abstract sculptures in reinforced concrete during the 1950s, including El animal del Pedregal(The Animal of the Pedregal, 1951) and the Torres de la Ciudad Satélite (Towers of Satellite City, 1957).

Mathias Goeritz exhibited widely in Mexico and beyond throughout his life, and had a significant influence on younger Mexican artists such as Helen Escobedo and Pedro Friedeberg. He died in Mexico City on August 4, 1990.