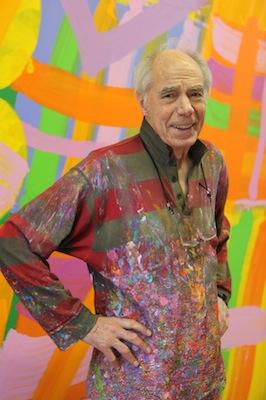 Born in London he was evacuated from there during World War II,, and upon returning, went to study at the Northampton School of Art between 1940 and 1941, before being conscripted into the Royal Air Force as a navigator. When the war was over, he resumed his course at Goldsmiths College from 1946 to 1950, where he would later go on to teach between 1962 and 1983. He was elected to The London Group in 1955. He worked in studios in the East End of London from 1970 onwards.

Irvin won a major Arts Council Award in 1975 and a Gulbenkian Award for printmaking in 1983.

His work was widely exhibited both in the UK and abroad, in such places as Arts Council of Great Britain, Birmingham City Art Gallery, the Chase Manhattan Bank, the Contemporary Art Society, Manchester City Art Gallery, Tate Britain, the Victoria and Albert Museum and Warwick University Arts Centre.

Irvin was appointed Officer of the Order of the British Empire (OBE) in the 2013 Birthday Honours for services to the visual arts.

Irvin was married to Beatrice Olive Nicolson in August 1947.