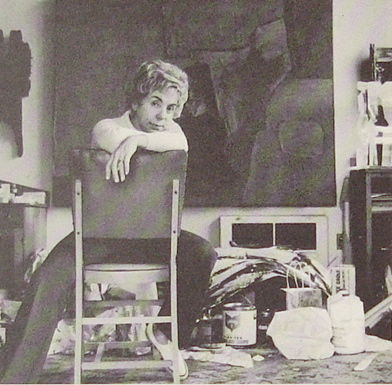 Jane Schenthal Frank was an American artist. She studied with Hans Hofmann and Norman Carlberg and is known as a painter, sculptor, mixed media artist, and textile artist. Her landscape-like, mixed-media abstract paintings are included in some important public collections, including those of the Corcoran Gallery of Art, the Baltimore Museum of Art, and the Smithsonian American Art Museum.

Jane Schenthal Frank (born Jane Babette Schenthal) (July 25, 1918 – May 31, 1986) was an American artist. She studied with Hans Hofmann and Norman Carlberg and is known as a painter, sculptor, mixed media artist, and textile artist. Her landscape-like, mixed-media abstract paintings are included in some important public collections, including those of the Corcoran Gallery of Art, the Baltimore Museum of Art, and the Smithsonian American Art Museum.

Jane Frank was a pupil of Hans Hofmann. She can be categorized stylistically as an abstract expressionist, but one who draws primary inspiration from the natural world, particularly landscape — landscape "as metaphor", she once explained. Her later painting refers more explicitly to aerial landscapes, while her sculpture tends toward minimalism. Chronologically and stylistically, Jane Frank's work straddles both the modern and the contemporary (even postmodern) periods. She referred to her works generally as "inscapes".

Jane Frank's paintings and mixed media works on canvas are in the collections of the Corcoran Gallery of Art ("Amber Ambience", 1964), the Smithsonian American Art Museum, the Baltimore Museum of Art ("Winter's End", 1958), the Herbert F. Johnson Museum of Art at Cornell University ("Red Painting", 1966), the Arkansas Arts Center in Little Rock ("Web Of Rock", 1960), and the Evansville Museum ("Quarry III", 1963). Her works are in many other public, academic, corporate, and private collections.

Jane Frank (when she was still Jane Schenthal) attended the progressive Park School and received her initial artistic training at the Maryland Institute of Arts and Sciences (now known as MICA, the Maryland Institute College of Art), earning in 1935 a diploma in commercial art and fashion illustration [Watson-Jones]. She then acquired further training in New York City at what is now the Parsons School of Design (then called the New York School of Fine and Applied Art), from which she graduated in 1939 [Stanton]. In New York she also studied at the New Theatre School. Her schooling complete, she began working in advertising design and acting in summer stock theater. From the sources, it is unclear whether she worked in these fields while still in New York, or only after returning to Baltimore. We do know, however, that she began painting seriously in 1940.

In a letter to Thomas Yoseloff, she wrote (quoted in Yoseloff's Retrospective, 1975, p. 34) that "prior to 1940 my background had been entirely in commercial art" and that when she began painting seriously, she had to "put behind me everything I had so carefully learned in the schools" (p. 34). She began a study of the history of painting and "went through a progression of spatial conceptions" (p. 35) from cave painting through the Renaissance, then concentrating on Cézanne, Picasso, and De Kooning. "I was also much concerned with texture, and heavy paint", she adds (p. 35).

After returning to Baltimore, she married Herman Benjamin Frank in 1941. According to the biography in "Baltimore County Women, 1930-1975" listed below, Jane had previously been working as a commercial artist "for department stores and advertising agencies", but she "gave up her career in commercial art for marriage and a family" (p. 16). After marrying, she signed her works consistently as "Jane Frank", apparently never including a maiden name or middle initial. Her husband, a builder, constructed their home, including a studio for his wife. With the initial demands of a new marriage and family presumably beginning to relax a bit, Jane Frank returned seriously to painting in 1947 (according to Stanton, p. 9).