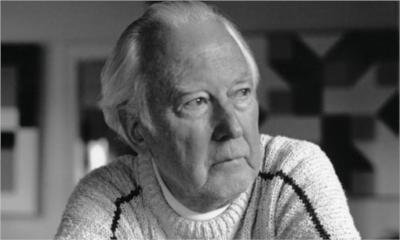 Frederick Hammersley (January 5, 1919 – May 31, 2009) was an American abstract painter. His participation in the 1959 Four Abstract Classicists exhibit secured his place in art history.

Frederick Hammersley was born in Salt Lake City, Utah. His father, a Department of the Interior employee, moved the family to Blackfoot, Idaho and eventually to San Francisco, where the young Hammersley first took art lessons. His studies later took him back to Idaho, at Idaho State University in Pocatello from 1936 to 1938 and then to Los Angeles for the Chouinard Art Institute starting in 1940. There he studied everything from figure painting to lettering and his instructors included Rico Lebrun. His artistic training was interrupted by a stint in the U.S. Army Signal Corps and Infantry as a graphic designer. His World War II service in England, Germany, and France was from 1942 to 1946. Fortuitously, he was stationed in Paris near the end of his service, and he took the opportunity to attend the École des Beaux-Arts in 1945. During this period, Hammersley met Pablo Picasso, Georges Braque and Constantin Brâncuși, visited their studios, and made sketches.

Hammersley returned to the U.S. and resumed his studies at Chouinard (1946), with financial assistance from the G.I. Bill. A year later, he continued his art education at the experimental Jepson Art Institute for another three years.

Hammersley first gained widespread acclaim when his paintings were featured in the landmark Four Abstract Classicists exhibit, which also showcased the work of Karl Benjamin, John McLaughlin, and Lorser Feitelson. This 1959 exhibit was organized by the Los Angeles County Museum of Art and curated by Jules Langsner, who, with Peter Selz, coined the term "hard-edge painting" to describe the work of these artists. The exhibit, which traveled to the San Francisco Museum of Modern Art, the Institute of Contemporary Arts in London and Queen's University in Belfast, Northern Ireland, was praised for its presentation of cool abstractions which were very different from the emotional ones of the established abstract expressionist movement.

He moved to Albuquerque, New Mexico in 1968 and took a teaching position at the University of New Mexico; he stopped teaching in 1971 so that he could concentrate full-time on painting. In 1973 he was honored with a prestigious Guggenheim Fellowship in painting, and he received National Endowment for the Arts fellowships in 1975 and 1977.

Hammersley wrote in an exhibition catalog, "hard-edge is often very hard to take, coming to it cold – or, even to the practiced eye". He expanded his repertoire beyond hard-edge, dividing his art into three categories: "hunches", "geometrics", and "organics".

"Hunch" paintings, produced from 1953 to 1959, start by laying down an initial shape. Other shapes are successively added, and the whole evolves in unplanned ways. Hammersley explained: "My painting begins with a hunch, no plan, no theory, just a feeling to make a shape. That shape dictates what and where the next will go, and so on..." The final canvas may be suggestive of a still-life or a landscape, although still quite abstract. Los Angeles Times art critic Christopher Miles wrote that "they show Hammersley to have been, from the start, as keen a student of Modernist style as he was of color and composition."