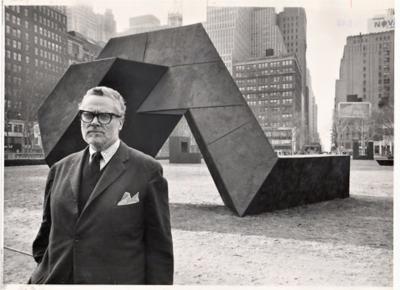 Anthony Peter Smith (September 23, 1912 – December 26, 1980) was an American sculptor, visual artist, architectural designer, and a noted theorist on art. He is often cited as a pioneering figure in American Minimalist sculpture.

Smith was born in South Orange, New Jersey to a waterworks manufacturing family started by his grandfather and namesake, A. P. Smith. Tony contracted tuberculosis as a youth and his family constructed a one-room prefabricated house in the backyard, in an effort to protect his fragile immune system. He was attended to by a nurse to maintain his health and tutors to keep up with his schoolwork. The medicine he was given came in little boxes which he used to form cardboard constructions and when he could, he visited the waterworks factory to marvel at the machines and fabrication processes. After the TB cleared up, Tony attended St. Francis Xavier High School, a Jesuit high school in New York City. In the spring of 1931 he attended Fordham University and then in September of that year enrolled at Georgetown University. He was disillusioned and felt no direction at Georgetown so he returned to New Jersey by in the winter of 1932. Around this time, during the Great Depression, he opened a second-hand bookstore in Newark, New Jersey and from 1934-36 worked at the family factory and attended evening courses at the Art Students League of New York, where he studied anatomy with George Bridgman, drawing and watercolor with George Grosz and painting with Vaclav Vytlacil. In 1937, he moved to Chicago intending to study architecture at the New Bauhaus, where he readily absorbed the interdisciplinary curriculum but ultimately again found himself disillusioned. The following year, Smith began working for Frank Lloyd Wright's Ardmore Project near Philadelphia, Pennsylvania, where he began as a carpenter helper and bricklayer, and eventually was named Clerk-of-the-Works, a position that inspired the young designer to discover his own unique artistic sensibilities.

While with Wright, Smith worked with other apprentices on the Armstrong house in Ogden Dunes, Indiana, before deciding to strike out on his own in 1940. Despite his lack of formal architectural training or a license, he was commissioned to design and build several homes including studios for Theodoros Stamos, Betty Parsons and a sprawling compound for Fred Olsen. Less than a mile away is another Smith house built for Fred Olsen, Jr. Despite these successes, the architect/client relationship frustrated Smith enough that he gravitated toward his artwork. Smith continued to paint in abstract geometric composition and found himself teaching a basic design course at Hunter College. One class assignment consisted of forming maquettes out of cigarette box cardboard, he then asked his students to increase the scale of their designs by 5 times with regular cardboard which startled students and teacher alike as powerful objects began to take shape. In 1956, while sitting in a colleague's office, he was drawn to the form of a simple file cabinet. He phoned a local fabricator and commissioned a box 2' x 3' x 2' in size. Although the welders assumed he was crazed, they treated the project with the utmost workmanship and the result was a stunning form to Smith. He had discovered a sculpting process that he continued to hone.