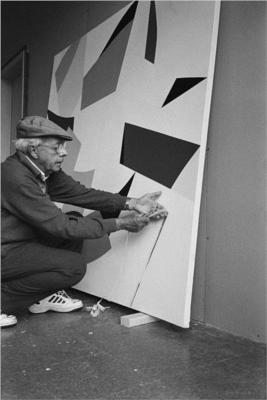 Marcel Barbeau at his atelier in Estrie, Sutton, Quebec in 2001

Marcel Barbeau is firstly an abstract expressionist and an action painting artist (1946-1957 and 1971-1980), whose paintings and sculptures become the material continuation of instinctual movement, which he superposes until formal achievement is reached. He’s thus pioneer of new pictural approaches, such as all over image, the cropping of composition by means of cutting a larger work or the association of several gestural techniques: scraping, marks, spots, drippings... His kinetic works (1959-1966) as well suggest the expression of movement, until it becomes incantatory hallucination. While adopting a minimalist approach in his quest for purity (19601963 and 1968-1971), he rejects its theoretical and formal constraints, to which he never totally submits. Let it be in his paintings, drawings or sculptures, his most simple compositions or most stripped forms – from the abstract figures that inhabits them – suggest movement, time passing by, a future to come. In that regard, his art constantly stands on the fringe of the aesthetic movements to which he relates to, imposing to the latter his own questionings, his own singular approach.

All of his work translates, in its own mutations, a will to simultaneously grasp the present and forecast the future, reflecting the thought typical of his era. As a witness of his time, he broadens his art with new visions inspired from science and new technologies. His interest in psychoanalysis leads him to make use of the unconscious in his Automatist gestural works (1946-1957). From his observations using electronic optical instruments, he wanted to express the infinitesimal and the infinitely big in his Taschist paintings (1954-1956). In New York (1965-1968), he refines his kinetic studies by meeting with researchers working at Bell Laboratory.

As a painter and sculptor, Barbeau has addressed most of the fields in visual arts. As a multidisciplinary artist, he tried to change the plastic language by transgressing disciplinary boundaries. His collages became paintings (1959-1963 and 1986-2005), art prints (1969) and sculptures (1984-1988). His drawings of poems, made of words and letters, have sometimes borrowed their medium and relief from painting (1957). His sculptures remind of drawings thrown in space (1971-1977) or look like small shelters, almost architectural (1985-1992). His performances, real stagings of the act of creation, materialized through paintings, drawings and, under his directive with the complicity of photographers or film directors, through photographs, films and videos, giving some permanence to otherwise ephemeral artistic gestures (1972-1980).

Curiosity leads Barbeau to study the main contemporary artistic trends originating from other disciplinary fields. His interest for those art forms encourage him to draw on their problematics, structures or writing processes in order to find some convergences, connivances, anchor points or to confirm aesthetic intuitions. He thus uses poetry, music, dance and architecture to renew his art, but not as subjects nor models. For example, his phonic calligraphies (1957-1960) inspired from his friend Claude Gauvreau’s poetry, his drawings inspired from Grupen by Stockhausen (1957-1960) or his interdisciplinary events from the seventies and the eighties. He even created works that fall under these disciplines: his phonic chants from the mid-eighties, which appear in the portrait film by Manon Barbeau entitled Barbeau, Libre comme l’art; his dances-action paintings from the seventies; the choreography he created for the opening dance part of his exhibit at Domaine Cataraqui (1999).