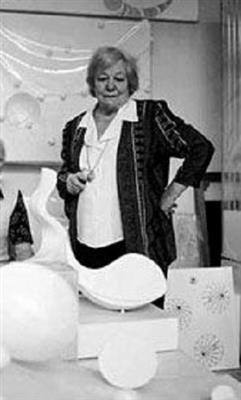 Martha Boto was born December 27, 1925 in Buenos Aires, Argentina. In the Thirties, she and her partner Gregorio Vardanega, an artist of Italian origin, were active participants in the lively artistic atmosphere of the era. The period was typified by forays into various schools and styles, from impressionist to expressionist painting, surrealism to abstraction, all of which led eventually to optical and kinetic art. Having been the first in Argentina to create a work of art that involved movement, Vardanega and Boto chose to move to France in 1959 to further their artistic pursuits.

During this time both artists were constructing Plexiglas works, most often mobiles suspended in space, and Boto would soon play a key role in the evolution of optical and kinetic art. In 1961 she presented her works at the Galerie Denise René in an exhibit entitled Art Abstrait Constructif International. Focussing her work around the concepts of movement, illumination, and color, Boto explored the potential of materials that could modify, absorb, and reflect light, i.e. Plexiglas, aluminum, or stainless steel. In 1964 she approached upon an even more articulated aesthetic utilizing electric mechanisms and projected light on objects in movement. Such is how the first kinetic-light boxes were born.

Mirrors, multiangular surfaces, or reflective metal play a fundamental role in the ability of the artist to distort space and to transform the appearance of each normal object in order to create undefined depth. In the same year, Boto exhibited works at La Maison des Beaux-Arts in Paris and once more at the Galerie Denise René nel 1969. Throughout the course of the Nineties her works were exhibited in France at l’Espace Bateau Lavoir (1993), la Galerie Argentine (1996) and the Saint-Lambert Post Office (1997). Martha Boto died in Paris October 13, 2004. In 2006, the Sicardi Gallery of Houston dedicated an exhibit both to Boto and Gregorio Vardanega, entitled Contact. Le cyber Cosmos de Boto et Vardanega.