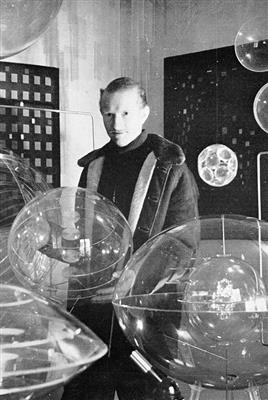 Gregorio Vardanega (21 March 1923 – 7 October 2007) was an artist of Italian origins who worked in Argentina and France. Vardanega and Martha Boto, his companion, created the term "chromocinetism" to describe their artistic research.

Vardanega was born in Possagno, Italy.

Vardanega's family migrated to Argentina when he was three years old. He attended the Escuela Nacional de Bellas Artes in Buenos Aires from 1939 to 1946.

Through the 1950s he experimented with kinetic art, constructing artworks moving and rotating at irregular intervals, which produced abstract patterns through lighting, reflections and shadows.

His first kinetic piece using an electric motor was exhibited in the gallery of the Estimulo de Bellas Artes in October 1957.

In 1959 Vardanega moved to Paris, where he met the Argentinian artist Martha Boto. They maintained contact with artists in Buenos Aires, including Eduardo Jonquières and his group "Arte Nuevo", and the artists' group MADI.

He was represented by Galerie Denise René. Vardanega had his first solo exhibition in Paris in 1964, which established him as an important practitioner of kinetic art.

He won gold medals at the Exposition of Visual Art in Argentina and at the International and Universal Exposition in Brussels in 1958.