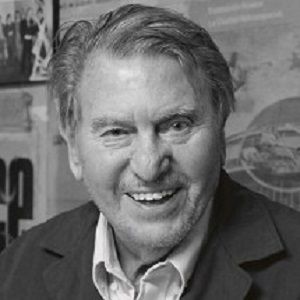 Gyula Kosice (born Ferdinand Fallik; April 26, 1924 – May 25, 2016) was a Czechoslovakian-born Argentine sculptor, plastic artist, and poet. He was one of the most important figures in kinetic and luminal art and luminance vanguard.

He was born in an ethnic Hungarian family in 1924. Kosice used his natal city name as artist name. He was one of the precursors of concrete and non-figurative art in Latin America. He used, for the first time in international art scene, water and neon gas as part of an artwork. Light and movement were also present in his works.

He created monumental sculptures, hydrospatial walks, hydrowalls, etc. He made more than 40 personal and 500 collective exhibitions all over the world.

In the early 1940s, Gyula started his first non-figurative drawings, paintings, and sculptures. He studied Leonardo da Vinci’s work during this time, and also wrote texts and poems about interdisciplinary art.

Gyula Kosice’s art career really started in 1944. The focus in his early art career was about concrete, nonobjective art and how it could radically change society for the better. He worked alongside many other Argentinian artists who had the same mindset, publishing art journals with them. In 1944, he started his first art group, Arturo, by collaborating with Carmelo Arden Quin, Rhod Rothfuss and Torres-García. This was an art journal that had articles containing these artists’ responses to constructivist art and poems. That same year, he went with this group of artists to host Artconcret invention and El movimiento de arte concreto-invención, a couple private exhibitions on constructivist art in private homes. One of these private exhibitions was in the home of photographer Grete Stern.

In 1945, Kosice and the same group of artists went on to create an entirely new group in Buenos Aires that was known as the Arte Concreto Invención. This group was particularly influential to the art community, inspiring many other art groups to begin such as the major concrete art group Associatión Arte Concreto-Invención (led by Tomas Maldonado and consisted of Manuel Espinosa, Lidy Prati, Enio Iommi, Alfredo Hilto and Raúl Lozza along with four of his brothers).

In 1946, Gyula Kosice started the Grupo Madí alongside Carmelo Arden Quin, Rhod Ruthfuss and Martín Blaszco. The meaning of the group has been called into question many times, but Kosice claimed that the word “Madí” was made-up by the group and carried no meaning whatsoever. The main concern of this group was to reach out beyond the art community and to encourage people in all creative disciplines (such as dancers, architects, and actors) to carry the “Madí spirit”. They did this by including articles in their published journals on poems written by others, general art theories, reports on musical events, photos of other exhibitions, and a “Madí Dictionary”. Over the next few years, he hosted many international exhibitions with this group of artists. Kosice wrote the Madi Manifesto, where he explained that Madi art is the "absolute value" of the presence and theme of the work, and that it was only to be expressed by the unique formal characteristics of the creative discipline that it was made in, and nothing more. His examples were painting with color on a two-dimensional surface, or creating a sculpture that has "movement" but not adding or changing color.